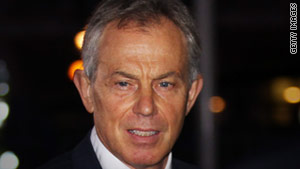 "It's not an extremist group in a way that we have seen in other countries; on the other hand, we shouldn't be complacent about it either," he said.

"It is founded on a different view of the relationship between religion and public policy than most people in secular societies would want," he argued.

"Religion is an important part of our society, its voice should be heard, but I wouldn't want to live in even a democratic theocracy," the former prime minister said at the office of his Tony Blair Faith Foundation, which works to promote multifaith understanding.

He spoke a day after Egypt's government, under pressure from nearly two weeks of anti-government demonstrations, held talks with a range of opposition groups, including the Islamists.

Officially banned but quietly tolerated, the Muslim Brotherhood is regarded as Egypt's most organized opposition force.

Blair has been warning for the past week against letting "religious autocracy" or "religious exclusivity" take hold in Egypt.

He declined to say Monday that the Muslim Brotherhood aimed to impose either one.

"The truth is, I don't know, and neither does anybody else. And therefore what I am really saying is, don't be hysterical about it, but don't be complacent about it either," he said.

"I've always believe that democracy and Islam are perfectly compatible concepts," he added.

Blair praised the role President Hosni Mubarak has played in keeping peace in the Middle East over the past 30 years.

"That's not to say that Egypt shouldn't change its internal politics, but he has been instrumental, and so have the Egyptian authorities, for example preventing (the militant Islamist movement) Hamas getting the weapons they would want in Gaza," he said.

"I am totally in favor of change in Egypt and democracy; I just think we need to manage it," he said. "There is a whole series of issues there about how Egypt makes that transition, which has implications for the wider region."