Amid Egypt-inspired unrest, Iraqi prime minister cuts salary in half 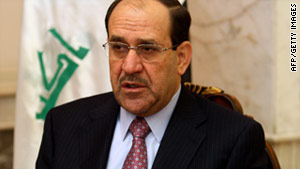 Baghdad (CNN) -- Amid growing unrest about poor public services and water shortages, Iraqi Prime Minister Nuri al-Maliki on Friday agreed to cut his salary in half.

Protesters around Iraq have said recent popular uprisings in Egypt and Tunisia inspired their weeklong demonstrations for improvements in government services and their quality of life.

Thousands have rallied since Sunday across the country, railing against rampant poverty, a 45% national unemployment rate and shortages of food, electricity and water, including several hundred in three different parts of Baghdad on Friday.

Al-Maliki said those concerns prompted his decision to axe his salary, which he said would "help reduce the differences in the living standards for different classes."

"Fifty percent of my monthly salary as prime minister will be reduced and returned to the government's treasury starting from the current month, as a contribution from me to reduce the difference in the salaries of the state officials," al-Maliki said in a statement released by his office and posted on his official website.

On al-Mutanabi Street in central Baghdad, nearly 200 people gathered Friday morning to show solidarity with those rallying against their governments elsewhere in the Arab world and voice domestic concerns.

Some shouted in support of "democracy and peace" in Egypt and Tunisia, and others cried, "Governments fall with the voice of righteousness" and "Don't prevent us from expressing. We demand change!" Marchers also carried banners saying, "Baghdad will not be Kandahar," referring to the recent crackdown by the Iraqi government on liquor sales.

"We stand in solidarity with the Egyptian people and their uprising in order to achieve their freedom and their independence from the dictatorship," protester Abdullah al-Rikabi told CNN. "We have not seen any changes in the past eight years, and we demand better basic services."

In Husseinya, a Shiite majority neighborhood in northern Baghdad, hundreds more demonstrators demanded improvements in electricity and water service. "We don't have a government but only a corrupted government!" some shouted.

These demonstrations began right after Friday services in neighborhood mosques.

"Iraq has suffered a big deal under the tyranny of (deposed dictator) Saddam (Hussein), and it's still suffering from bad basic services, food and other things," protester Bassam Abdulrazaq said.

Wiam Saber said "Iraqi people are fed up with things in Iraq," but the recent events elsewhere in the Arab world stirred them to publicly voice their concerns through demonstrations.

"The things that happened in Egypt and Tunisia was kind a motivation for us, so we started this just to let them know that we are not going to be silent, and we will talk about all the horrible things that happen in Iraq," he said.