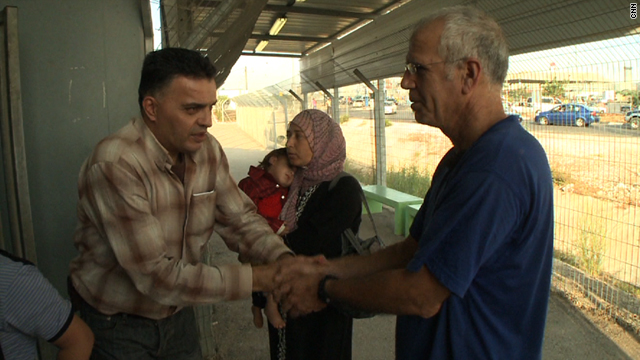 Jerusalem (CNN) -- Aya Abu Mouwais, a 3-year-old who lives in the West Bank, can barely walk or talk because of a failing kidney and liver. For much of her life, the Palestinian child has needed dialysis to survive.

Thankfully, an Israeli man has been able to help her get the treatment she so desperately requires.

More than 500 times in the past two years, Yuval Roth and his volunteers have driven Aya and her mother roundtrip from a checkpoint near the West Bank border to Rambam Medical Center, which is an hour away in Haifa, Israel.

"What Yuval has done, no one else has done," said Aya's mother, Suhair. "He is day by day helping us to get her to the hospital. I'm not allowed to drive an Israeli car, so if not for Yuval, we wouldn't be able to transport her. I thank him."

Leaving the West Bank is the only way Aya's family can get dialysis. For one thing, medical facilities are limited in the territory.

"In the Palestinian Authority, it's very expensive to get health care, and most of the people cannot afford it," Roth said.

It's also expensive to make the trip to Israeli hospitals. Although the Palestinian Authority allows sick children and adults to leave the West Bank for treatment, Palestinians are not allowed to drive past the checkpoints. To get to Israeli hospitals, they'd have to take a taxi, which would cost at least $90 each way.

Fortunately, there is Roth and his organization, Derech Hachlama ("On the Road to Recovery"). Since 2006, Roth and his team of volunteers have been giving Palestinians a lifeline.

"The volunteers are driving at least five days a week," said Roth, a 55-year-old carpenter and professional juggler from Pardes Hanna, Israel. "Some (drive) in the morning to drop off patients, and others come in the evening to take them back. That makes the whole thing easy, since they can still go to work and don't have to spend the whole day."

The price of the conflict is a lot more than the price of making peace.
--CNN Hero Yuval Roth

For Roth, the transportation service is a way to recover from personal tragedy. In 1993, his brother Udi was kidnapped and killed by members of Hamas. After his loss, Roth found a way to channel his anger into peace.

"I heard an interview on Israeli radio with a man who lost his son in the same way that I lost my brother," Roth said. "After the interview, I called him ... and he said he had an idea to establish a group to encourage dialogue between bereaved families from both sides, Israelis and Palestinians."

"One day, (a program participant) called and told me his brother might have a brain tumor. He had an appointment at Rambam hospital but no way to go," Roth said. "He asked if I could drive him, and I agreed it would be no problem."

That first call for help was more than four years ago. As word of Roth's generosity spread, transportation demands grew, and Roth began to recruit his friends as driver-volunteers.

Today, Roth's group has grown to 200 volunteers. Transport coordination efforts are run entirely by Roth, who spends many hours on his cell phone inquiring about the location of volunteers and Palestinian families. Each volunteer maintains his or her own vehicle, but Roth helps cover gasoline costs with donation money he has received.

Even though differences exist, including some language barriers, Roth believes that the program helps Israelis and Palestinians learn from and respect each other.

"When we are coming to pick up the sick kids, the (Palestinian and Israeli) checkpoint managers help us a lot," Roth said. "It makes our life and their life a lot easier. I think Palestinian families trust me also because I'm coming as one of them. I feel like they are my family or my friends."

Roth's group has driven an estimated 90,000 kilometers (about 55,000 miles) in 2010 alone. He says they have helped hundreds of Palestinians get access to health care.

"I lost my brother, but I didn't lose my head," Roth said. "This activity gives me an essence for life. I have learned the price of the conflict is a lot more than the price of making peace. We are all human beings."

Want to get involved? E-mail On the Road to Recovery at roadtorecovery10@gmail.com for more information.