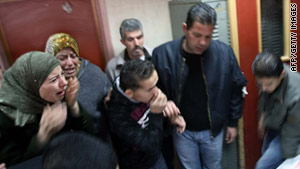 Palestinian relatives cry near the body of Maher Qadus, 18, after he was brought into a hospital in the West Bank.
STORY HIGHLIGHTS
RELATED TOPICS

Jerusalem (CNN) -- Two Palestinian teens were killed on Thursday, one in a shooting and the other by an explosion, medical and security sources said.

The Israeli Civil Administration that oversees the West Bank said it is investigating the incident and could provide no immediate details. The incident occurred in the village of Iraq Burin, south of Nablus.

A group of armed settlers from the nearby settlement shot at the teen while he was tending his field, said Ghassan Douglass, the Palestinian official In charge of the settlement activity on the north of the West Bank.

He said it's not the first time armed settlers and Israeli troops raided the village and opened fire.

In March 2010, two Palestinian residents of the village were shot dead by the Israeli army, according to Palestinian officials.

In Gaza, a 14-year-old Palestinian Bedouin shepherd was killed during a blast near the unoperational crossing of Sufa, south of Gaza, medical and security sources said.

The sources said the boy was minding his flock close to a section of the Israeli border known for incursions.

The Israel Defense Forces said it has no knowledge of any incidents in the area.