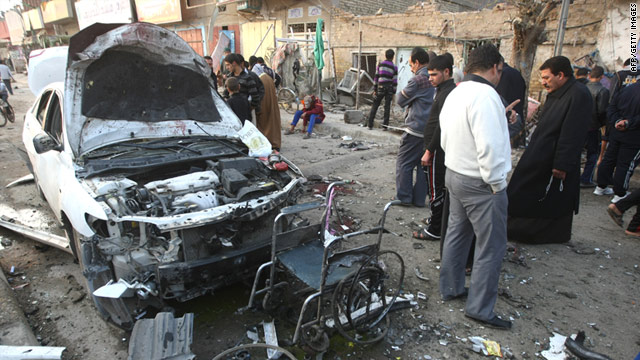 Iraqis gather at the scene of the car bomb that detonated during a funeral ceremony in Baghdad on Thursday.
STORY HIGHLIGHTS
RELATED TOPICS

Baghdad (CNN) -- A wave of bombings left 51 people dead and more than 120 wounded Thursday in various Baghdad neighborhoods, including one in which angry residents later threw stones at security forces, the Interior Ministry said.

At least 48 people were killed and 121 wounded when a parked car bomb detonated near a funeral tent in the predominantly Shiite neighborhood of Shula in northwestern Baghdad, an Interior Ministry official said.

After the Shula bombing, people threw rocks at security forces, the official told CNN, and some people fired guns.

Security forces withdrew until an Iraqi Army unit dispersed the crowds by shooting in the air and imposing a partial curfew in Shula, the official said.

The gathering of the crowd reflects the growing frustration and anger against the government and security forces, especially by the country's Shiites, who have come under intensive attacks in recent days.

Iraq has witnessed in the past 10 days constant high-profile attacks, mainly targeting Shiites and security forces, that have claimed the lives of more than 200 people.

Some 151 people were killed in the entire month of December.

Attacks on security forces in Tikrit and Diyala were claimed by the Islamic State of Iraq, an umbrella group that includes al Qaeda in Iraq.

There was no claim of responsibility for attacks on the Shiites. Officials have blamed al Qaeda and other Sunni extremist groups of carrying out these attacks in an attempt to reignite the sectarian war that gripped Iraq for years.

Many Iraqis blame their security forces for not preventing these attacks and question the abilities of these forces to secure the country, especially as the U.S. military prepares for a complete troop withdrawal by the end of this year.

Many have blamed the deteriorating security situation on politicians still not agreeing on key security posts that remain vacant in the government formed more than a month ago.

Meanwhile, three people died in three other attacks in the Iraqi capital.

A roadside bomb exploded next to a police patrol in southern Baghdad, killing a civilian and wounding seven people, including three police officers.

In another attack in southeastern Baghdad, a roadside bomb exploded near a government convoy. It missed the convoy but killed one civilian and wounded three others.

In central Baghdad, a roadside bomb exploded on a busy road, killing one civilian and wounding four.

The blasts came after Wednesday night's assassination of three government employees by gunmen using pistols equipped with silencers in three neighborhoods in Baghdad.

Two of the three government employees worked at Iraq's Ministry of Foreign Affairs and the third employee worked at the Ministry of Housing and Reconstruction.