Yemeni activist freed, wins promise of release for others 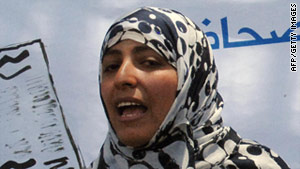 (CNN) -- A Yemeni rights activist, whose arrest sparked an international outcry and domestic protests, was released from prison Monday and said there is a revolution taking place in her country.

Authorities arrested Tawakkol Karman over the weekend, accusing her of organizing anti-government protests in Yemen's capital, Sanaa. They let her go after more than 5,000 protesters gathered in her support.

She had initially refused to leave prison until officials also agreed to free other activists detained over the weekend, she said.

Karman is a leader of the protest movement in Yemen that is calling for President Ali Abdullah Saleh to step down.

"This revolution going on in Yemen was inspired by Tunisia's 'Jasmine Revolution' and we are now having a 'Jasmine Revolution' in Yemen," Karman told CNN soon after her release. "The huge amount of pressure coming from the people here will force President Saleh to leave office."

Protests in Tunisia ended 23 years of President Zine El Abidine Ben Ali's rule. They have ignited unrest elsewhere in the region, including Algeria and Egypt.

Karman, who heads the Women Journalists Without Chains organization in Yemen, said she was arrested Saturday night near her home.

"The police asked me to get out of the car but I refused. I asked to see if they had a warrant for my arrest and if there were charges against me. I was removed from the car by force," she said.

Karman was arrested under a warrant for leading unlicensed student protests in Sanaa last week, according to a statement from the interior ministry.

Known as one of the most-prominent rights activists in Yemen, she has helped to organize several protests that have drawn hundreds of demonstrators.

People in Yemen are upset because the parliament is considering loosening the rules on presidential term limits. That has sparked concerns among the opposition that Saleh might try to appoint himself president for life.

Saleh has been in office for some 32 years and was last re-elected in 2006.

Yemeni authorities ordered Karman's release after she spent more than 30 hours in jail.

"My message is that we, the protesters who have been out there in the streets, are actually looking out for the welfare of our republic -- that we are making sure our leaders are accountable. They have taken our republic as a kingdom for themselves and we are holding our corrupt leaders accountable," she said.