Saudis give up on Lebanon mediation talks

By The CNN Wire staff, CNN 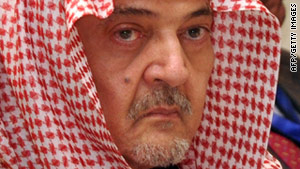 Al-Faisal made the comments in an interview with state-run Saudi TV in Sharm el-Sheikh, Egypt where he was attending an Arab economic summit to discuss economic challenges facing Arab nations. He also described the political situation in Lebanon as "dangerous."

But when no agreement was near the Saudi king "lifted his hands and kept away from the negotiations," al-Faisal said.

Meanwhile, Qatari and Turkish foreign ministers arrived in Lebanon Tuesday in an apparent attempt to pick up where Saudi and Syrian efforts left off.

Following the announcement of the government's collapse last Thursday when Hariri was in Washington for a planned meeting with U.S. President Barack Obama, Hariri stopped on the way back to Beirut in Ankara for consultations with Turkish Prime Minister Recep Tayyip Erdogan.

Local media reported on Tuesday that a gathering of ''hundreds of unarmed men'' from the two Shia parties, Amal and Hezbollah, had marched on downtown Beirut. Tension has risen in the capital since Monday, when the prosecutor in the assassination of former Lebanese Prime Minister Rafik Hariri submitted his long-awaited results of the case.

The Special Tribunal for Lebanon in the Netherlands has been investigating the February 2005 car bombing that killed Rafik Hariri, the father of Saad Hariri.

In a statement released Monday, President Barack Obama appealed to all Lebanese factions to maintain calm and avoid violence. "Any attempt to fuel tensions and instability, in Lebanon or in the region, will only undermine the very freedom and aspirations that the Lebanese people seek and that so many nations support," Obama said in the statement.

In his interview on Wednesday, the Saudi foreign minister echoed a similar appeal and added, that "if matters come to separation and partition of Lebanon, then Lebanon will end as a state containing this type of peaceful coexistence between religions, nationalities, and different strata and this will be a loss for the entire Arab nation."