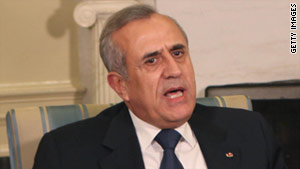 Beirut, Lebanon (CNN) -- The prosecutor in the assassination of former Lebanese Prime Minister Rafik Hariri on Tuesday called the filing of an indictment in the case "an important moment" both for Lebanon and the international community, and he added "our work is far from over."

Daniel A. Bellemare, the Special Tribunal for Lebanon prosecutor, said that the move, which brings the case to a pre-trial judge, "marks the launch of the judicial phase" of the tribunal's efforts. However, he did not reveal the names of those referred to in the indictment.

"For the first time, a legal case has been launched by an international tribunal against those responsible for a political assassination in Lebanon.

"This step has been taken at the request and on behalf of the people of Lebanon and in fulfillment of a mandate from the United Nations Security Council," he said in a video and paper statement from The Hague in the Netherlands.

Bellemare submitted the long-awaited results of the case on Monday to the judge. The tribunal has been investigating the February 2005 car bombing that killed Hariri.

Lebanon has been plunged into political uncertainty since a political bloc led by the Shiite militant movement Hezbollah withdrew its representatives from the Cabinet last week. The move prompted the collapse of Prime Minister Saad Hariri's Western-backed government. Saad Hariri is the son of Rafik Hariri.

"As frustrating as it may be, the content of the indictment must remain confidential for the time being. So, unfortunately, you will have to wait a little bit longer. According to the Rules of the Tribunal, I cannot reveal either the charges or the name of the person or persons referred to in the indictment.

"This continued confidentiality is essential as I cannot presume that the Pre-Trial Judge will confirm the indictment. If it is confirmed, the content of the document will be made public in due course and when so ordered by the Pre-Trial Judge."

Bellemare said in his statement that "justice cannot be rushed" and said anyone named in the indictment is "presumed innocent."

"The evidence must be credible and compelling. I have made it clear from the start that I would act independently and that I would be driven by the evidence alone. To those who did not expect or want this day to come, I would say that while justice may be slow, it is deliberate."

He said he was proud of his staff's work and thanked Lebanese authorities for their assistance.

"The indictment filed yesterday represents the fruit of the hard work, under challenging circumstances, of all those involved in the process. This is only a first step in our collective quest to end impunity in Lebanon. A quest that must be pursued through existing laws and institutions."

The judge, Daniel Fransen, will review the submissions for about six to 10 weeks, the tribunal said.

Fransen's options include confirming or dismissing the entire document, requesting additional evidence or confirming some counts and dismissing others, according to the tribunal. Both the prosecutor and the head of the defense office can request that the indictment remain confidential.

Meanwhile, the foreign ministers of Turkey and Qatar were heading to Lebanon to try to help resolve a political crisis following the collapse of the country's government last week, the presidential palace said Tuesday.

On Monday, Suleiman postponed consultations with parliament members to appoint a new prime minister, the presidential palace announced. The decision to delay talks by a week was announced moments before the meeting was to begin.

The government collapse has prompted a flurry of international diplomatic activity. The leaders of Turkey, Syria and Qatar met in Damascus, Syria, on the matter Monday.

The Turkish prime minister's office said in a statement that "developments in the region, especially in the crisis in Lebanon, were discussed. The three leaders stressed in the talks the importance of finding a solution to the problem."

The statement said the leaders "welcomed the decision of the postponing of the talks at the Lebanese Parliament until political efforts for the formation of a new government which will bring stability to the Lebanese people are more concrete."

"Lebanon is a frontline state and it lies on the fault line of several major confrontations," said Paul Salem, director of the Carnegie Middle East Center in Beirut, which describes itself as a public policy think tank and research center, said Monday. "That's why we see Turkey, Qatar, Saudi Arabia, Syria meeting sort of frantically to try to find a negotiated way out of this because nobody really wants an outright confrontation."

U.S. Secretary of State Hillary Clinton on Monday called for all parties to back the tribunal's work.

"It will be impossible to achieve the peace and stability that the people of Lebanon deserve unless and until the era of impunity for political assassinations in Lebanon is brought to an end," she said.

In a televised address Sunday night, Hezbollah leader Hassan Nasrallah made it clear he would oppose appointing Hariri for another term as prime minister. "It's clear to me that the opposition is unanimous in not naming Prime Minister Hariri to form the new government," Nasrallah said.

Nasrallah also denounced the Special Tribunal for Lebanon. Nasrallah had been pressuring the Lebanese government to withdraw its financial and political support from the tribunal, which he claims is an American-Israeli conspiracy designed to weaken Hezbollah.

Hezbollah spokesman Ibrahim Moussawi said Monday the party would issue a statement on the indictment, but did not say when.

Rafik Hariri died February 14, 2005, along with 22 others, in the car bombing in Beirut. The bomb, detonated as his armored motorcade passed through the city's seaside district, contained hundreds of pounds of explosives and left a 10-foot crater in the street. It triggered widespread protests that led to the ouster of Syrian forces from Lebanon.

An initial United Nations probe in 2006 found the assassination may have been linked to high-ranking Syrian officials. Syria has denied any involvement.