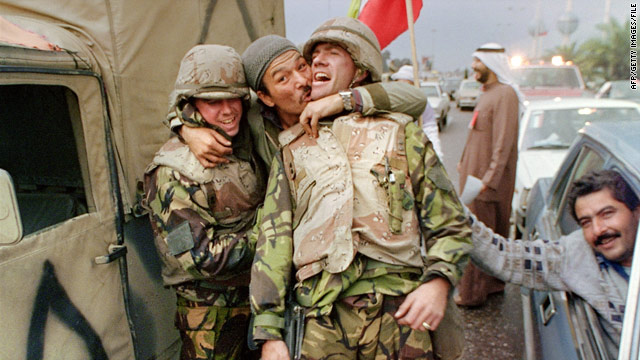 Kuwait residents hug and congratulate U.S. Marines in February 1991 after the U.S. and its allies liberated Kuwait City.
STORY HIGHLIGHTS

Baghdad (CNN) -- Twenty years after the United States and its allies launched Operation Desert Storm to roll back Saddam Hussein's invasion of Kuwait, Iraq still owes its smaller neighbor billions in reparations and more than 1,000 people are still missing.

It was in August 1990 that Iraq invaded, declaring that Kuwait was its 19th province. The United States led a counteroffensive starting January 16, 1991.

While the era of Saddam Hussein is now part of history, the impact of the invasion he ordered is anything but.

"Kuwait was of course traumatized by the invasion in 1990," said Joost Hiltermann of the International Crisis Group, which monitors conflicts around the world. "It has yet to overcome the fear that Iraq will yet again want to show that Kuwait is the 19th province rather than an independent neighboring state -- and Kuwait will want some kind of guarantees that will not be repeated."

The United Nations lifted Hussein-era sanctions against Iraq in December, a largely symbolic step toward Iraq regaining full sovereignty and its status in the international community.

And although its government has continued to reassure the international community that the new Iraq is no longer a threat, Baghdad is still subject to U.N. resolutions over its outstanding disputes with Kuwait.

More than 1,000 people -- or their remains -- are still missing, including Iraqis, Kuwaitis and others. The Kuwaiti government also wants back government documents that disappeared during the invasion in 1990. Iraq, Kuwait and the International Committee of the Red Cross are working together on the missing persons.

Iraq is also continuing to pay off its war reparations to its neighbor. Baghdad says it has paid about $30 billion to date and still has to pay more than $20 billion more. The money is deducted from Iraq's main income, oil revenues.

"I do understand that Saddam created damages to the others, but again, it's enough," he told CNN.

"We do need each and every penny" for "reconstruction of our destroyed country" and because the Iraqi people need services, he said.

And while the borders between the two countries have finally been established with the help of the United Nations, questions remain on both sides regarding rights and access, and some 200 Iraqi families must be relocated.

In what is arguably the biggest step toward improving these strained ties, Kuwait's Prime Minister Nasser Mohammed Al-Ahmed Al-Sabah visited Baghdad on Wednesday, the highest-ranking Kuwaiti visit in decades. Iraq's Prime Minister Nuri al-Maliki is expected to make a visit to Kuwait soon.

"Now we see a thaw of sorts, we'll have to see how far it goes," said Hiltermann of the International Crisis Group. "That could lead to a peace treaty of some sort because there are some outstanding issues that need to be resolved, but all of them are resolvable, and I think if the political will is there, it can be done."

Analysts say while there are signs of progress being made, the issue is essentially a lack of trust on both sides -- and building that trust will not be easy.