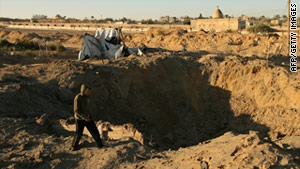 A Palestinian man inspects a smuggling tunnel damaged by an Israeli airstrike on Rafah in the southern Gaza Strip.
STORY HIGHLIGHTS
RELATED TOPICS

One of the strikes was in the southern city of Rafah, the other was on a training field for the military wing of Hamas in the central Gaza city of Deir El-Balah, a Hamas police spokesman and sources with the Palestinian ambulance services told CNN.

In a joint statement, the Israel Defense Forces and the Israeli Security Academy said the attacks were carried out on two Hamas-linked sites in response to rocket fire.

The Israeli Air Force targeted "a Hamas terror activity center in the central Gaza Strip and a smuggling tunnel in the southern Gaza Strip," it said. "Direct hits were confirmed."

The statement said the sites were targeted "in response to this morning's firing of a Qassam Rocket at the Ashkelon Shore Regional Council, home to 13,000 residents."

Journalist Talal Aburahma contributed to this story from Gaza City.