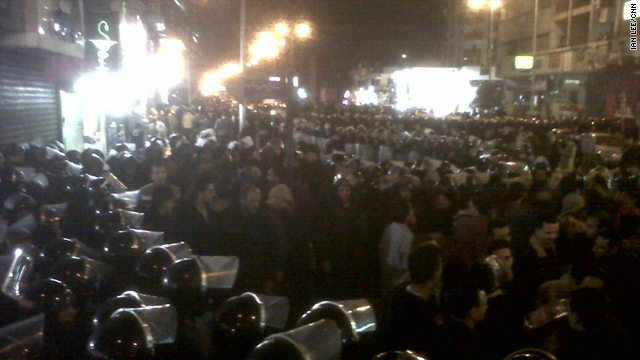 Hundreds of security officers in riot gear herd supporters of Coptic Christians through Shubra, a suburb of Cairo, on Tuesday.
STORY HIGHLIGHTS

Cairo, Egypt (CNN) -- Hundreds of supporters of Egyptian Christians protesting a New Year's bombing that killed nearly two dozen of their members marched Tuesday night on a church in a Cairo suburb, where they were met by an equal number of security officers in riot gear.

For the first night since the car bomb, which detonated in front of a Coptic church in Alexandria, there were no reports of violence during the protests.

Christians and Muslim supporters in the Shubra neighborhood of Cairo shouted their outrage over the Alexandria attack on Coptic Christians.

"With my blood and my soul I will defend the cross," chanted crowds of protesters, as they wended their way down Shubra Street toward a church. Some carried crosses -- up to 4 feet (1.22 meters) long -- emblazoned with messages of protest written in red ink to represent blood. Some protesters lay down on the street, prostrating themselves in the shape of a cross.

Protests had broken out in Christian areas of Egypt every night since the car bombing outside the Church of the Two Saints. But security forces beefed up their presence Tuesday in Shubra and Alexandria. Hundreds of officers -- outfitted in helmets with visors, body armor and carrying shields and night sticks -- lined the street, leaving a path for the Shubra demonstrators to pass.

Millions of people live in the Shubra neighborhood, home to a strong Christian population and many churches.

About 9% of Egypt's 80 million residents are Coptic Christians, according to the CIA's World Fact Book.

The Coptic Church bases its theology on the teachings of the Apostle Mark, who introduced Christianity to Egypt, according to St. Takla Church in Alexandria, the capital of Coptic Christianity. The religion is known for its rift with other Christians in the fifth century over the definition of the divinity of Jesus Christ.

Journalist Ian Lee contributed to this story from Cairo