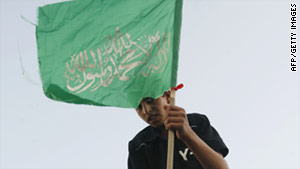 Jerusalem (CNN) -- Five members of Hamas were charged Sunday with planning to fire a rocket into a Jerusalem stadium during a soccer game, Israeli police spokesman Mickey Rosenfeld said.

The five were arrested in November, Rosenfeld said.

According to a statement from Israel's security service, the Shin Bet, the two main suspects were identified as Mussa Hamada of East Jerusalem, and Bassem Omri, an Israeli citizen living in Beit Tzafafa.

Both are members of Hamas and the "Muslim Brothers" movement in Jerusalem, the Shin Bet said.

The pair are suspected of planning terrorist attacks following Israeli airstrikes on the Gaza Strip in 2008, the statement said.

One of the possibilities they considered was possibly firing a missile into the soccer stadium in Jerusalem during a game.