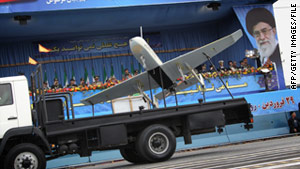 (CNN) -- Iran said Sunday it had shot down what it described as two Western spy planes over the Persian Gulf, according to Iranian media reports.

He described the aircraft as a spy drone "which can take pictures," according to state-run Press TV, which cited Fars. However, he did not say when the incident occurred or give more specifics.

A U.S. military official said Sunday that the United States is not aware of missing drones in the region.

"We have no recent reports of any losses of UAVs in the Gulf due to any cause," said the official, referring to unmanned aerial vehicles. "And while we have lost them in the past, I am not aware of any indication that those had been due to hostile fire of any kind."

The official would not speak for attribution, citing intelligence sensitivities.

Iran's Hajizadeh said that Western forces have made limited aggressions against Iran and that "we have, thus far, shot down a large number of their highly advanced spy planes ... two of these planes have been shot down in the Persian Gulf."

He said previous incidents have not been disclosed to the media, "and this is the first time that we reveal this news," according to Fars.

After shooting down the planes, the Revolution Guard Corps copied and produced them in large numbers through reverse engineering, Fars said.

The news agency reported that it was the second time Iran announced it had shot down Western aircraft. In January 2007, an Iranian lawmaker told Fars a U.S. spy plane was shot down by the Iranian military. Syed Nezam Mola Hoveizeh told Fars at the time the aircraft was a spy drone, and that "Americans send such spy drones to the region every now and then."