Sinn Fein candidate says he 'won't be interrogated' about IRA past 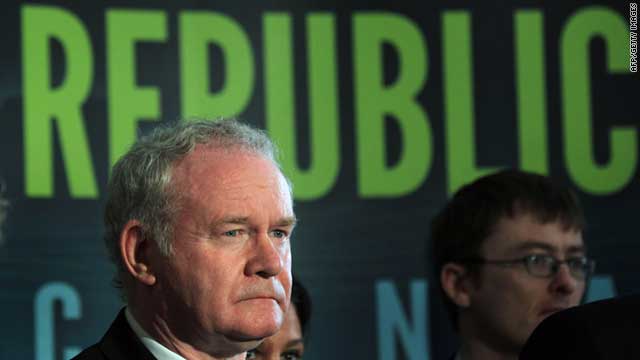 Martin McGuinness was selected by Sinn Fein Sunday to be their candidate for president of the Republic of Ireland.
STORY HIGHLIGHTS
RELATED TOPICS

Belfast, Northern Ireland (CNN) -- Martin McGuinness, the Sinn Fein candidate for president of Ireland, refused Monday to answer questions about his past as a local commander of the Provisional IRA.

McGuinness said he "would not be interrogated" by an interviewer on local radio and refused to answer questions about specific IRA killings.

The former IRA leader was selected by his party Sunday to be their candidate for president of the Republic of Ireland and is stepping down as Northern Ireland's deputy first minister to run.

Ulster Unionist Party leader Tom Elliott said Monday that McGuinness should "come clean" over his IRA past and apologize to victims.

Elliott, whose pro-British party is on the opposite side of the Northern Ireland divide from McGuinness' Sinn Fein, said it would be "extremely useful if he were to sit down and talk of his overall involvement in the IRA and accept that their campaign was wrong.

"That would help alleviate the hurt of the victims, hurt caused by Martin McGuinness and the IRA," Elliott said.

But not all victims object to McGuinness' candidacy.

Alan McBride, whose wife was killed in a bomb attack on the mainly Protestant Shankill Road in Belfast in 1993, said he has "no real reservations" about McGuinness running.

"We have been in a (peace) process for many years and I recognise the role Martin McGuinness has played in that in terms of getting us to where we are," he said, adding that he recognized other victims "would have very mixed views" on McGuinness.

About 3,500 people were killed in violence between pro-British unionists and pro-Irish republicans in the three decades up to the Good Friday peace agreement in 1998.

Accepting his party's nomination Sunday, McGuinness said republicans have an obligation to "heal the wounds of their actions."

In recent years, he has received death threats from hardline dissident IRA splinter groups because of his support for the peace process.

He referred to a recent upsurge in violence in the province in his speech Sunday.

"I know there will be a very strong temptation for people to drag us back to the past. God knows there are enough of them trying to do so, in a violent sense, at the moment," he said.

He described himself as a man of peace who can work across sectarian lines.

"People see me very much as a peacemaker, but, more importantly, they see me as a peacemaker who can be trusted," he said. "I have every confidence that the peace process will be strengthened by my participation in the presidential election."

"I am proud to have served in government alongside unionists," he said, referring to those who want Northern Ireland to remain part of the United Kingdom rather than uniting with the republic to the south. "I can work with anyone. Times have changed in the North."

Sinn Fein won 14 seats in the Irish parliament, the Dail Eireann, in elections this year.

Elections are due to be held October 27.

An opinion poll published Sunday showed Labour's Michael D. Higgins leading the race, ahead of Sen. David Norris, who announced Friday he was back in after withdrawing in August.

But the Sunday Independent/Millward Brown Lansdowne poll was completed before Norris said he was rejoining the race and before Sinn Fein put McGuinness' name forward.