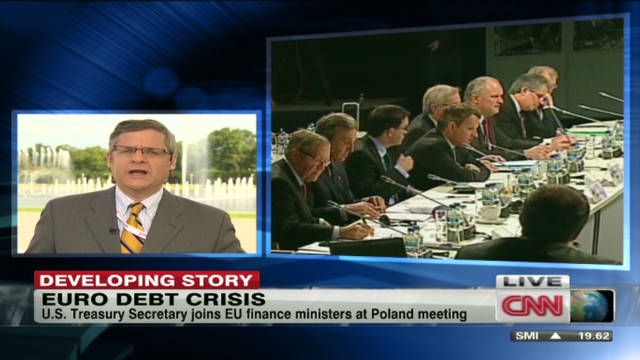 Wroclaw, Poland (CNN) -- With the eurozone's financial health hanging in the balance, U.S. Treasury Secretary Timothy Geithner huddled with European finance ministers in Poland Friday in search of a way out of a debt crisis that is imperiling economies worldwide.

Finance ministers for the European Union member states, central bank presidents and representatives of other major bodies are focusing on how to handle Greece's debt, boost growth and ensure financial stability in the eurozone.

European finance ministers said after a meeting here Friday morning that they would delay to October a decision on whether to pay out the next tranche of a multi-billion euro loan to Greece.

Jean-Claude Juncker, president of the Eurogroup -- which brings together the finance ministers of the 17 eurozone nations -- announced the decision after talks which were also attended by Geithner, in an unusual step.

He said the Eurogroup "recognized significant efforts made by the Greek authorities over the last year," in bringing in reforms and austerity measures, but said the "continued full implementation of the adjustment program remains crucial."

Trying to thwart a Greek default

Markets in Europe have been in turmoil in recent weeks as concern mounts that Greece might default on its huge debt, which would send shock waves through the 17-nation eurozone and beyond.

Olli Rehn, European commissioner for Economic and Monetary Affairs, said that recovery was stalling in the second half of the year but that the group did not forecast a return to recession.

The two-day meeting of Europe's Economic and Financial Affairs (ECOFIN) Council -- hosted by Polish Finance Minister Jacek Rostowski and the president of the National Bank of Poland -- comes ahead of G20 and IMF meetings later this month.

Rostowski told CNN's Jim Boulden Friday it was important for Geithner to be present in Wroclaw because "if we don't get a proper grip on the debt crisis, if we don't resolve it, in fact, not immediately... but in a very few months, then the consequences could be extremely serious."

Rostowski said a solution needed to be found to Greece's problems without it leaving the eurozone, as has been suggested in some quarters, because that would pose a serious threat to the European Union itself.

Steps taken by the European Central Bank recently to intervene in the Spanish and Italian bond markets had bought the European Union more time to tackle the issues confronting Greece and others.

In the past few days, European banks have come under increasing pressure as the markets weigh their exposure to sovereign debt held by Greece and other struggling eurozone nations.

"We have entered into a dangerous phase of the crisis," she said. "Collective, bold, decisive, courageous action is needed."

But despite the gloomy picture, Lagarde said she believed there was still a "path to recovery" ahead, although it would be harder to achieve than after the collapse of the Lehman Brothers bank three years ago that precipitated a global financial meltdown.

"It will require strong political will across the world, not just in one country but in many countries, and it will require decisive action on the part of some central banks," she said.

Her speech came hours after the Federal Reserve and four other powerful central banks announced they were throwing a lifeline to Europe's struggling banks by providing much-needed access to U.S. dollars.

The European Central Bank, along with the Fed, the Bank of England, the Bank of Japan and the Swiss National Bank, said three U.S. dollar auctions would be held from October to the end of the year to help out European banks that need the currency to fund loans and repay debt.

Separately, Swiss bank UBS announced Thursday it had suffered an estimated $2 billion loss from unauthorized trading -- potentially one of the biggest such losses ever.

No clients would be affected but the "unauthorized trading by a trader in its investment bank" could cause UBS to post a loss in the third quarter of this year, it said.

CNN's Jim Boulden and Kendra Petersen contributed to this report.