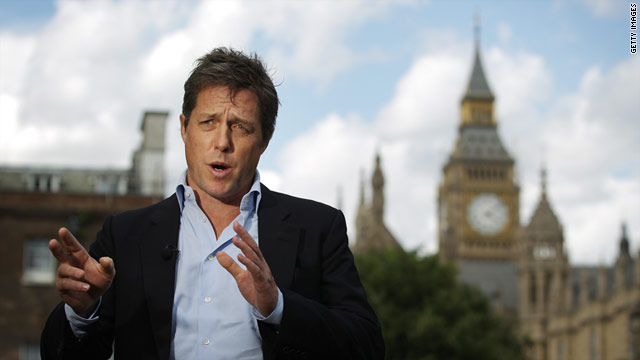 Actor Hugh Grant has been given permission to participate in an inquiry into phone hacking by journalists.
STORY HIGHLIGHTS
RELATED TOPICS

London (CNN) -- Hugh Grant and J.K. Rowling are among dozens of celebrities given permission to participate in a top-level inquiry into phone hacking by British journalists, the judge leading the investigation said Wednesday.

Judge Brian Leveson gave "core participant" status to politicians, celebrities and the families of murder victims "who have, or may have, suffered as a consequence of press activity."

British Prime Minister David Cameron set up the Leveson Inquiry in response to public fury at the News of the World newspaper, which shut down this summer after accusations its journalists had illegally eavesdropped on people as they searched for stories.

Most British newspaper groups, including News of the World publisher News International, also got core participant status, as did its former editor Rebekah Brooks.

So did the Metropolitan Police, which has been accused of bungling the original investigation into phone hacking. Officers are also accused of taking bribes from journalists.

Lawyers for core participants can examine witnesses at the inquiry.

Police are investigating both the phone-hacking and bribery allegations, and lawmakers are conducting their own separate probes.

James Murdoch -- who gave evidence before the parliamentary committee in July with his father Rupert -- will face fresh questions from lawmakers after Hinton testifies, provided that the latter agrees to attend, the spokesman added.

A News Corp. spokesman told CNN James Murdoch was "happy to appear in front of the committee again to answer any further questions members might have."

Lawmakers are seeking to determine whether James Murdoch misled them about the scale of illegal eavesdropping at News of the World in previous testimony.

The scandal surrounding News of the World, which also involves accusations of bribing police, has forced two top police officers to resign and put Prime Minister David Cameron under pressure for hiring another former News of the World editor, Andy Coulson, to be his spokesman. Coulson resigned from that job earlier this year.

Hinton -- one of Rupert Murdoch's longest-standing employees -- resigned as head of News Corp.'s Dow Jones unit and publisher of The Wall Street Journal in July. He was formerly chief executive of News International, the British arm of News Corp. which published News of the World.

Mark Lewis, a lawyer representing hacking victims, and legal firm Farrer & Co. -- which has represented News International in a number of cases, including advising them on how much they should pay out in settlements over hacking claims -- have also been asked to appear on the same day as Hinton.

Lewis told CNN Tuesday that the mother of a victim of the July 7, 2005, terror attacks in London is now to join a civil case against the News International newspaper group over alleged phone hacking -- illegally accessing a person's voice mail. Sheila Henry, whose son Christian Small died in one of bomb blasts, will be the sixth participant in the civil action, he said.

Lewis said he also is representing Natalie Rowe, a former escort agency owner who sold a story to the Sunday Mirror newspaper in 2005 alleging that Conservative Party politician George Osborne had taken cocaine before he was elected. He has always denied the claim.

Rowe believes she was the victim of phone hacking after a story appeared at the same time in News of the World, Lewis said. The Metropolitan Police told Rowe in the past few weeks that her details were listed in the documents of Glenn Mulcaire, a private investigator used by News of the World and jailed for hacking royal voice mail in 2007, he added.

Australian broadcaster ABC News aired an interview with Rowe on Monday that suggested Osborne had helped Coulson get a job within the Conservative Party in exchange for News of the World giving a positive spin to the Rowe story in an editorial piece in 2005.

Rowe is to sue News International for damages over the alleged phone hacking, Lewis said, and the case would "undoubtedly look at the future relationship that existed between Andy Coulson and the Conservative Party and the subsequent cases."

A spokesman for Osborne, now chancellor of the exchequer -- Britain's equivalent of a finance minister -- denied the allegations when contacted by CNN Tuesday.

Meanwhile, a group of shareholders filed a lawsuit against News Corp. in the United States alleging that the board has failed in its duties to shareholders by allowing Rupert Murdoch "to use News Corp as his own personal fiefdom."

"The board has not lifted a finger to engage in any oversight of Murdoch's rule, even when it was provided with clear and unmistakable warnings that News Corp.'s business practices were not only unethical, but also illegal," the lawsuit claims, adding that Murdoch had sought to siphon value away from the company for the benefit of his family and friends.

The board did nothing about alleged improper conduct at News of the World despite phone-hacking allegations and court cases being brought to its attention in 2002, 2007 and 2008, the lawsuit states.

Among them was ex-legal affairs director Jonathan Chapman, who, under grilling, named Hinton as the person who had approved a large payment to Clive Goodman, the paper's royal correspondent who was jailed over phone hacking, after Goodman was dismissed from News of the World.

The other three to be questioned were former News of the World editor Colin Myler, the paper's ex-legal manager, Tom Crone, and its former top human resources officer, Daniel Cloke.

In his testimony, Crone said Murdoch must have known that phone hacking at the News of the World was not confined to Goodman.

Murdoch would only have given Crone authority to settle a lawsuit against News of the World if he had understood that there had been more illegal eavesdropping, Crone said.

James Murdoch ordered the best-selling Sunday paper closed in July amid public fury at the accusation that the voice mail of schoolgirl Milly Dowler was hacked after she vanished in 2002. She was later found dead.

London's Metropolitan Police opened a new investigation in January into phone hacking and police bribery. More than a dozen people have been arrested. All are currently free on bail.

The Leveson Inquiry opened last week by taking applications from people and organizations wanting to participate, including News International.

The Metropolitan Police, several newspaper groups and more than a dozen suspected victims of phone hacking applied to be considered "core participants."

Hinton had been with News Corp. for 52 years before his resignation in July.

For much of that time, he played a critical role in Rupert Murdoch's media empire. In a letter to Murdoch at the time of his resignation, he apologized for being "ignorant of" the alleged misconduct at News of the World.