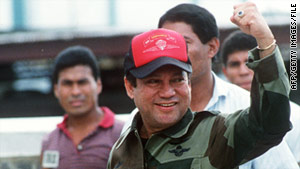 "I hope that in a few hours the judge will consider his conditional release and see beyond the strategies that have been used," Levy said, alleging that officials were trying to stall Noriega's return.

On Wednesday a French appeals court said it needed more time to weigh an extradition request from Panama's government -- apparently delaying the Panamanian leader's possible return to his home country.

France ordered Noriega's extradition last month, responding to a Panamanian government request for the former dictator's return to face charges he had a political rival killed.

But on Wednesday the French court said it needed more time and information to review an additional extradition request filed by Panamanian officials connected with another case.

Last year, a French court sentenced Noriega to seven years in prison for money laundering. Noriega also was fined almost 2.3 million euros ($2.9 million), the amount of drug money he was accused of laundering through French banks.

The U.S. government has portrayed Noriega as the ultimate crooked cop -- a man who was paid millions by the Medellin drug cartel in Colombia to protect cocaine and money shipments.

He was convicted of drug trafficking and other crimes in the United States.

U.S. Secretary of State Hillary Clinton cleared the way for Noriega to be sent to France in April 2010 after he spent 20 years in a U.S. federal prison.

"He is very tired. He is 77 years old and has spent 21 years in prison. That's a lot," Levy said Wednesday. "Nonetheless, he has a fighter's spirit and he is ready to face this."