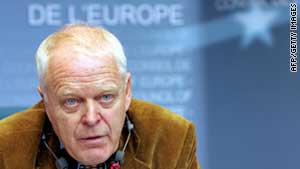 Paris (CNN) -- The human rights commissioner for the Council of Europe urged countries that have hosted secret CIA prisons to come clean Monday, as the 10th anniversary of 9/11 approaches.

Thomas Hammarberg said Poland, Romania and Lithuania were among at least seven countries that hosted "black sites" for "enhanced interrogation" during the "war on terror."

Hammarberg's statement comes as documents seized from Moammar Gadhafi's compound in Libya shed light on the program of extraordinary rendition, or questioning of terror suspects in third-party countries where U.S. law does not apply.

The Council of Europe's Hammarberg said the CIA had held "high-value detainees," including alleged 9/11 mastermind Khalid Sheikh Mohammed, in Poland, between 2002 and 2003.

The Polish site closed and a new secret prison opened in Romania in 2003, Hammarberg charged, and existed for over two years. Lithuania also hosted two sites, he said.

Neither the CIA, Romania nor Lithuania immediately responded.

Poland's Ministry of Foreign Affairs said it would not comment while prosecutors in the country are still investigating.