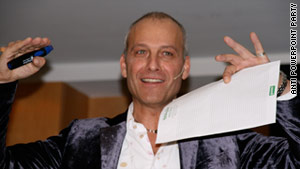 (CNN) -- Taxes, health care, jobs. These are issues that are center stage in U.S. elections. But a parliamentary candidate in Switzerland has a slightly different platform: PowerPoint.

Come again? Yes, we're talking about the computer program that has become the tool of choice for public speakers of all varieties -- such as politicians, businessmen, and educators.

Matthias Poehm would rather see it all stopped. No more discussion points. No more, "Next slide, please." No more droopy eyes tired of following along.

The Swiss public speaking coach believes PowerPoint presentations dilute the point, dull the speech and in the end, make people less persuasive. They are also a huge waste of money, Poehm says.

He does not want to abolish PowerPoint. He just wants people to talk about how it brings on big-time boredom.

"As soon as you write your text and speak it in parallel, you destroy your message," Poehm says from his home on the outskirts of Zurich. "If you don't believe me, try it out."

The 51-year-old former software developer-turned public speaking coach is so convinced of the evils of PowerPoint that he formed an entire political party based on his cause. He is now an official Anti PowerPoint Party (APPP) candidate in the upcoming Swiss parliamentary elections.

"The APPP sees itself as the advocate of approximately 250 million citizens worldwide, who, every month, are obliged to be present during boring presentations," the party's website says.

The website highlights "horror slides," including one from the U.S. Army that lays out the influence of various factors on the Afghanistan war. Ten different colors, many arrows pointing this way and that. The New York Times described it as a bowl of spaghetti.

Then-U.S. commander Gen. Stanley McChrystal, to whom the slide was presented, famously commented: "When we understand that slide, we'll have won the war." That served as more ammunition for Poehm.

He teaches people that it's possible to take the driest topics and turn them into fireworks. PowerPoint does the opposite, he says. It could turn Martin Luther King Jr.'s legendary "I Have a Dream Speech" into a snore.

PowerPoint slide: Dream Vision for the Future of America

King: "I have a dream that one day this nation will rise up and live out the true meaning of its creed: 'We hold these truths to be self-evident, that all men are created equal.' "

PowerPoint: Nation to rise up to live up to creed that all men are created equal

PowerPoint: Mutual get together of former slaves and slave owners at table of brotherhood in Georgia

King: "I have a dream that one day, down in Alabama, with its vicious racists ... little black boys and black girls will be able to join hands with little white boys and white girls as sisters and brothers."

PowerPoint: Black and white children joining hands in the racist state of Alabama

PowerPoint: Transformation of the former slave state of Mississippi into oasis of liberty and justice

The slides, says Poehm, would have sucked the passion out of King's speech, distracted people and in the end, destroyed his powerful message.

If indeed PowerPoint is so ineffective, then why do so many people use it?

"Why do so many people smoke cigarettes?" Poehm asks.

"At first cigarettes were thought not to be harmful," he adds. "Then the marketing changed. Now fewer people smoke because they were informed about harmful effects, that they can kill you."

That's what he wants to do with PowerPoint -- change the awareness of the product and let people know there is a better alternative.

And what might that be? A flip chart, of course.

Poehm harkens back to the days before computers, even before the days of the overhead projector, when speakers made points by scribbling on an giant white piece of paper.

The power lies not in what the end result is but in the act of creating, he says.

"It is a fact that people convince. Not technical aids."

Poehm got his start in the training business 14 years ago after he was asked to stand up at an office meeting and talk about staff representation.

His nervousness rivaled that of a stammering King George VI (as seen in the movie "The King's Speech") delivering his first public address. An arrow sliced through Poehm's head. Sweat trickled down his brow. His entire body was trembling.

Determined to master his fear, Poehm put himself through public speaking classes -- first one, then two, then many a week, until he became so confident that he wanted to impart his knowledge to others.

But along the way he noticed that most people chose to use PowerPoint with their words. Poehm flinched.

Better, he says, to print out your PowerPoint and use it as cue cards if you need help to get through a speech.

Microsoft, the company that developed PowerPoint, had no comment on the matter.

Poehm, meanwhile, was preparing for the October 23 election. A win for him at the polls, he believes, is sure to mean a loss for PowerPoint.