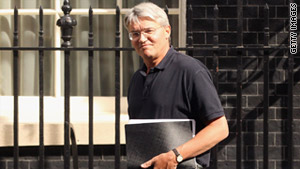 International Development Secretary Andrew Mitchell was photographed leaving the prime minister's residence at 10 Downing Street with what appeared to be briefing notes on Afghanistan and its president, Hamid Karzai, who will finish his second term in 2014. The top of the page carried the header "Protect-Policy."

One paragraph falling under "points to make," and which Mitchell's finger points to, reads: "Note that Karzai has publicly stated his intention to step down at the end of his second term -- as per the constitution. This is very important. It improves Afghanistan's political prospects very significantly. We should welcome Karzai's announcement in private and in public."

The following paragraph read: "Afghan perceptions of violence are very important for their confidence in the future, and for their readiness to work for the Afghan Government. Have we got the strategic communications on levels of violence right?

The document goes on to mention ongoing "critical reforms" to Afghanistan's banking sector and a planned visit by the International Monetary Fund there in September, as Afghanistan prepares to submit a new program to the IMF board.

"We are continuing to work closely with both sides for resolution," the document states.

Britain has 9,500 troops in Afghanistan, second to the United States' contribution of 90,000, according to International Security Assistance Force figures.

Mitchell is not the only British official to commit the gaffe. Two years ago, Metropolitan Police Assistant Commissioner Bob Quick was forced to resign after being photographed leaving a breakfast meeting at 10 Downing Street with a document that revealed details of a counterterrorism raid.

In 2008, then-Housing Minister Caroline Flint's briefing notes, which contained a warning over the property market, were photographed as she was arriving at 10 Downing Street.