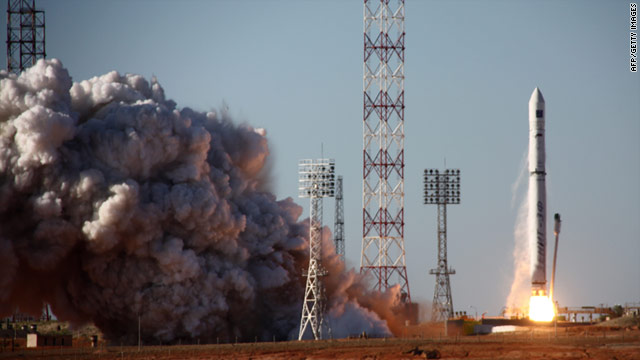 A rocket blasts off from the Russian leased Baikonur Cosmodrome in Kazakhstan on July 18.
STORY HIGHLIGHTS
RELATED TOPICS

The unmanned Progress cargo craft, which launched at 7 p.m. in Kazakhstan (9 a.m. ET) from the Baikonur Cosmodrome, was due to dock with the ISS on Friday.

Rescue teams have been dispatched to the crash site of the Progress-M12M, the regional branch of the Russian Emergency Situations Ministry told CNN.

Officials could not immediately confirm whether the crash might have caused any damage on the ground. Russia's Interfax news agency reported that the rocket had come down in the Altai region.

Earlier on Wednesday, Russian government space agency Roscosmos reported that the cargo ship had deviated from its planned trajectory shortly after takeoff, failing to reach the target orbit, and had disappeared from radars.

"The engine system's erratic functioning and its subsequent breakdown occurred during the operation of the third stage at the 325th second of the flight of the Soyuz-U carrier rocket with the Progress M-12M resupply vehicle," Roscosmos said in a statement.

The spacecraft was to deliver more than 3.5 tonnes (about 3.85 U.S. tons) of cargo to the crew of the ISS now orbiting the Earth, Roscosmos said.

The load included food supplies, medical equipment, personal hygiene items, as well as scientific equipment needed for experiments aboard the ISS, according to space officials.

There are currently six astronauts at the ISS -- three from Russia, two from the United States and one from Japan.

"The situation with the loss of the Progress is not good, of course, but there are stocks of necessities aboard the ISS to support the cosmonauts that will be sufficient to last out until the arrival of the next Progress" cargo ship, Russia's Space Mission Control executive Vladimir Solovyov told Russia's Interfax news agency.

"The cosmonauts won't have to save on food-stuffs," he said.

Another Progress freighter is scheduled to launch on October 28, Solovyov said.

Space experts said Wednesday's crash was the first failure of a Progress cargo unit in more than 30 years of operation.

However, it is the second failed space launch in Russia in less than 10 days.

On August 18, Russia lost a sophisticated Express-AM4 telecommunications satellite when the launch vehicle put it into the wrong orbit.

In the latest incident, Mission Control Houston said it had received a report of an "off-nominal situation" during the Progress rocket's third and final stage.

NASA spokesman Rob Navias, at the Johnson Space Center in Houston told CNN that contact with the space craft had been lost about three minutes before it was to reach orbit.

He said the six people currently living on the ISS are "well supplied -- actually oversupplied" since the delivery of goods by the final U.S. shuttle mission, carried out by Atlantis last month.

NASA is now reliant on the Russian space agency to ferry U.S. astronauts to orbit, since the grounding of the U.S. shuttle fleet has left the United States with no way to lift humans into space.

Plans are in the works for private companies to begin shipping cargo to the station, and eventually to carry astronauts as well.

In addition to taking supplies to the ISS, they have been used to carry out scientific experiments and help adjust the space station's orbit, the agency reports.

The Johnson Space Center in Texas is home to NASA's astronaut corps and trains astronauts from the United States and other nations.

CNN's Maxim Tkachenko and Dave Alsup contributed to this report.