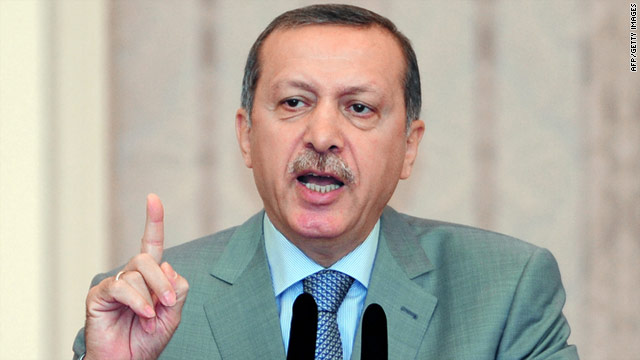 Earlier Thursday, the military had said in a statement that Turkish artillery pounded more than 100 targets in the border region.

"Similar activities of the Turkish Armed Forces, both domestic and abroad, will continue with determination until the separatist terrorist organization that uses northern Iraq as a safe haven and an attack base against Turkey is eliminated," the military said.

The Kurdish Firat News agency, which is sympathetic to the Kurdistan Workers Party, or PKK, confirmed Wednesday night's air and artillery attacks in the rugged mountains of northern Iraq, where the rebels have long operated.

Firat quoted an unnamed rebel commander saying that the air raid was expected.

"It wasn't a surprise for us. We had measures. Air raids happen almost every year. We are a 30-year guerrilla movement. Therefore, they didn't achieve any results from yesterday's attack," the rebel commander said.

Turkish war planes were once again spotted flying over the Qandil mountains of northern Iraq on Thursday, Firat reported.

Thursday, military helicopters carried the flag-draped coffins of the eight soldiers to a funeral ceremony in the eastern border city of Van.

"Our pain is very big. Our sorrow is like the mountains," Brig. Gen. Levent Kose, a senior Turkish military commander, announced at the ceremony. He then issued a bellicose warning to the PKK. "They won't win, they won't achieve anything. They will melt in their own darkness. They will dry in their own quicksand. They will choke on their own blood."

Meanwhile, Turkey's president, prime minister and top military commanders gathered for a meeting of the country's national security council in Ankara Thursday. The officials were expected to discuss policy challenges, including the conflict with the PKK and official Turkish frustration with another neighbor, Syria, where the regime has violently cracked down on anti-government protesters.

The latest round of fighting with the PKK could present a major test for the Turkish armed forces. Long one of the most powerful political institutions in Turkey, the military has been shaken after scores of generals and admirals were arrested and put on trial for allegedly plotting to overthrow Prime Minister Recep Tayyip Erdogan's government. In an unprecedented move last month, the country's four most senior military commanders all resigned simultaneously.

Kurdish fighters have been locked in a bloody conflict with the government since the 1980s. More than 30,000 people have been killed in the fighting, many of them ethnic Kurds.

For decades, Ankara imposed oppressive policies, which banned Kurdish names and their language, and sometimes referred to the community as "mountain Turks."

Erdogan's government has attempted to improve relations with Turkey's Kurds in recent years by launching a Kurdish channel on state television and acknowledging "mistakes were made" in the way Ankara treated the minorities.

But tensions have escalated between the government and the main Kurdish nationalist political party in recent months.

After winning a larger number of seats in June parliamentary elections, the main Kurdish Peace and Democracy Party (BDP) boycotted the swearing-in ceremony for new lawmakers.

Kurdish lawmakers are protesting a decision by Turkey's electoral board, which disqualified a prominent Kurdish candidate from participating in the June election.

Politician Hatip Dicle was barred from running due to a 20-month prison sentence he received for "making propaganda for a terrorist organization," a Turkish reference to the PKK.

Meanwhile, PKK fighters have claimed responsibility for a series of deadly attacks, including a Saturday ambush near the southeastern province of Sirnak that killed at least three soldiers.

In a statement e-mailed to CNN, the PKK also claimed responsibility for last week's sabotage of a natural gas pipeline between Turkey and its eastern neighbor, Iran.

The rebel strikes, as well as a battle last month that left at least 13 Turkish soldiers dead, have raised fears of an escalation in the long-simmering war between the Turkish state and Kurdish separatists.