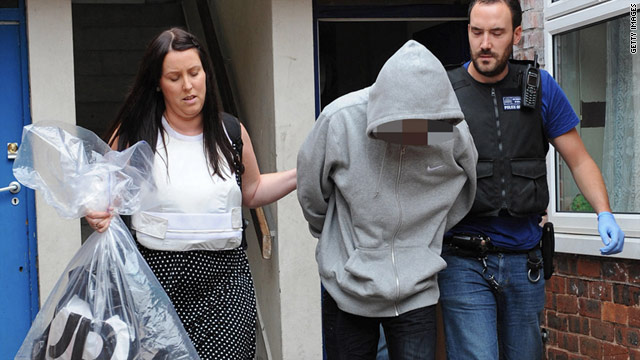 A 15-year-old male suspect is arrested for violent disorder and handling of stolen goods in connection with the riots in London.
STORY HIGHLIGHTS

London (CNN) -- Prime Minister David Cameron blames the riots that shook Britain over the past 10 days on a "slow-motion moral collapse ... in parts of our country," he said Monday, as police arrested a new suspect linked with one of the deadliest incidents in the violence.

Cameron listed problems including "Irresponsibility. Selfishness. Behaving as if your choices have no consequences. Children without fathers. Schools without discipline. Reward without effort. Crime without punishment. Rights without responsibilities. Communities without control," in a speech in his constituency in Oxfordshire.

And he promised that the government will "review every aspect of our work to mend our broken society" in the coming weeks.

Thousands of people have been arrested and processed through courts working around the clock since violence erupted over the killing of a man in London during a police operation.

Police in London announced Monday they had arrested 1,593 people over violence, disorder and looting since riots broke out just over a week ago. Some 926 of those people have been charged, they said.

Police released video footage from a closed-circuit TV camera that showed what was described in a news release as "the attempted murder of two police officers as they chased looters" August 8. The footage, which showed officers being hit by a speeding car that ran at several officers in a street, was released in hopes that it could lead to the identity of those in the car, police said.

"One officer was struck so hard that some of his body armour came off and (he) can clearly be seen lying in the middle of the road after the collision," the news release said. Both injured officers are recuperating, the release said.

In a separate news release, Metropolitan police singled out the work of the department's dog unit -- and one dog specifically -- for commendation. The release said 30 to 40 dogs from the unit were sent out nightly to work with police officers.

Obi, a 3-year-old German Shepherd, was hit by a thrown brick, sustained multiple skull fractures and received emergency treatment "at various London veterinary clinics," the release said. The dog is recuperating, but expected to be out of service for several months.

"Obi, like all our dogs, showed incredible bravery in the face of the mass disorder," Constable Phil Wells of the Dog Support Unit said in the release. "All Met dogs receive the best possible training to help them cope with the most dangerous of situations, but this week has tested them and us to the limit."

Metropolitan police arrested a suspect late Sunday over the killing of another man during the ensuing riot. The 24-year-old was the sixth person arrested in connection with the shooting of Trevor Ellis in the London neighborhood of Croydon on August 8.

And police in Birmingham arrested a man Monday in connection with the hit-and-run deaths of three other men during the riots. The 30-year-old man, who was not named, is the seventh person held in the incident.

Residents say the three victims in the hit-and-run in Birmingham were mowed down by a car while protecting businesses from looters in Britain's second-largest city.

Haroon Jahan, 21, along with two brothers, Shazad and Munir Hussein -- both in their 30s -- were keeping watch outside a gas station following a break-in by looters during the riots, relatives said.

"The guy who killed him drove directly into the crowd and killed three innocent guys," said Tarik Jahan, father of the youngest victim. "Why? What was the point of doing that? I don't understand."

"All they wanted to do was to protect their business and other businesses within the community," said Abdullah Khan, an uncle of the two brothers, on Saturday.

Shazad Hussein was looking forward to the birth of his first child in a few months, the uncle said.

"A father will never hold his child, a child will never be held by his father, a wife without a husband, parents who have lost two sons. Words can never express what we are going through at this moment," he said.

Khan appealed for justice, and asked witnesses to come forward.

Birmingham, like many other areas in Britain, was rocked by riots that started after the shooting death of a man who protesters said was killed by police.

The violence first broke out on August 6 following protests over the death of Mark Duggan in the north London neighborhood of Tottenham. He was shot after a police unit that deals with gun crime stopped a cab carrying the 29-year-old father of four.