Shock over 'respectable' lives behind masks of UK rioters

By Catriona Davies for CNN 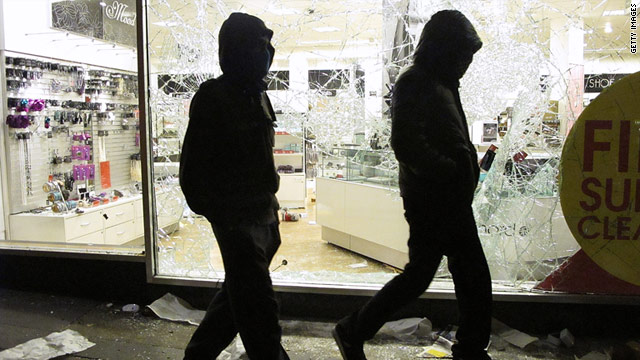 London (CNN) -- Before they started appearing in court, most people assumed London's rioters and looters were unemployed youths with no hope and no future.

So there was much surprise when details of the accused began to emerge, and they included some from wealthy backgrounds or with good jobs.

Those passing through London's courtrooms on Tuesday and Wednesday -- some courts sat overnight to cope with the numbers -- have included a teaching assistant, a lifeguard, a postman, a chef, a charity worker, a millionaire's daughter and an 11-year-old boy, newspapers reported.

But its front-page headline told a different story about the accused: "Lifeguard, postman, hairdresser, teacher, millionaire's daughter, chef and schoolboy, 11."

The Daily Mail reported: "While the trouble has been largely blamed on feral teenagers, many of those paraded before the courts yesterday led apparently respectable lives."

The upmarket Daily Telegraph devoted its page three to the case of Laura Johnson, the 19-year-old daughter of a company director who pleaded not guilty to stealing £5,000 ($8,000) of electrical goods, under the headline: "Girl who has it all is accused of theft."

The newspaper said she lived in a converted farmhouse in the leafy London suburb of Orpington, Kent, with extensive grounds and a tennis court, had studied at one of the best-performing state schools in the country and now attends the University of Exeter.

Reporter Andrew Gilligan wrote in the Daily Telegraph: "Here in court, as David Cameron condemned the 'sickness' in parts of British society, we saw clearly, for the first time, the face of the riot: stripped of its hoods and masks, dressed in white prison T-shirts and handcuffed to burly security guards.

"It was rather different from the one we had been expecting."

He added of the defendants at Highbury Magistrates Court in north London: "Most were teenagers or in their early twenties, but a surprising number were older.

"Most interestingly of all, they were predominantly white, and many had jobs."

Most newspapers highlighted the case of Alexis Bailey, a 31-year-old learning mentor in an elementary school, who pleaded guilty to burglary with intent to steal at an electrical store in Croydon, south of London.

It was reported that Bailey surrendered to police without stealing anything.

The youngest defendant so far -- an 11-year-old boy -- also gained much attention in newspapers.

The boy, who cannot be named for legal reasons, from Romford, east of London, admitted stealing a £50 ($80) trash can from a department store, the Guardian reported.

The Daily Mail highlighted the cases of Barry Naine, a 42-year-old charity worker charged with burglary; postman Jeffrey Ebanks, 32, and his student nephew Jamal Ebanks, 18, allegedly caught in a car stuffed with electrical goods near a looted Croydon store.

It also reported that Jason Matthews, a 35-year-old new father arrested in a Tesco supermarket, told police he "was not one of the bad ones" and needed diapers for his baby; and that Christopher Heart, a 23-year-old scaffolder and father of two, shouted "sorry for the inconvenience" and broke down in tears after admitting burglary at a sports shop in east London.

Lifeguard Aaron Mulholland, 30, wept as he appeared in court accused of joining thieves in a cell phone shop, the Daily Mail reported.

The Sun reported that an organic chef, Fitzroy Thomas, 43, and his 47-year-old brother Ronald, denied smashing up a branch of the Nando's chicken restaurant chain.

The Metropolitan Police in London said on its website on Thursday that 401 people have been charged so far.

Greater Manchester Police said five men aged between 46 and 23 had already been jailed for their part in the disorder.

West Midlands Police said 26 people, including a 44-year-old man, had appeared before an overnight court session in relation to the disorder in Birmingham.