'Calm down and go home, please,' father of man killed in Britain urges 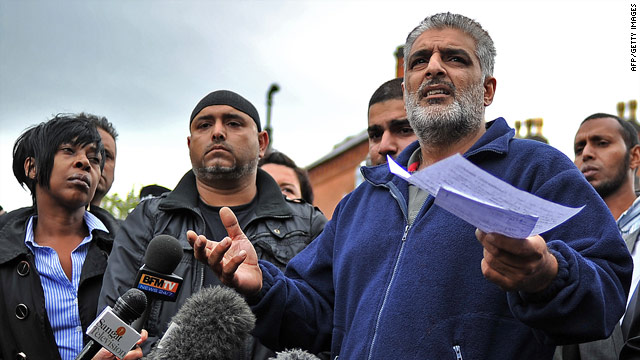 (CNN) -- The deaths of three men who residents say were mowed down by a car while protecting businesses from looters have heightened fears in Britain's second largest city.

Jittery residents said they peer over their shoulders as they scuttle down the streets. Businesses that remained opened all night close at the first sign of darkness.

And the distraught father of one of the victims, who tried desperately to revive his dying son, appealed for calm.

"Blacks, Asians, whites. We all live in the same community. Why do we have to kill one another?" said Tarik Jahan. "What started these riots, and what's escalated them? Why are we doing this?"

Jahan's son, Haroon, was killed early Wednesday in Birmingham, along with two brothers, Shazad and Munir Hussein -- both in their 30s.

Racial tension amid violence in England

Will naming and shaming looters work?

The 21-year-old was struck by a car while he kept watch outside a gas station following a break-in, according to the father.

"I heard the thud and ran around and I saw three people on the ground. My instinct was to help the three people. I didn't know who they were; who'd been injured," he said.

"I helped the first man and somebody from behind told me my son was lying behind me. So I started CPR on my own son."

He struggled to revive his son, his face and hands covered in blood.

"Why? Why? The guy who killed him drove directly into the crowd and killed three innocent guys," he said. "Why? What was the point of doing that? I don't understand."

British police have not tied the deaths to the riots, but residents say the victims were among a group that lined up outside storefronts to stop rioters from breaking into properties.

"I remember passing by there a few hours before it happened, and there were lots of Asian kids, calmly watching guard outside shops, not disturbing anyone," said Esther Kiilu, a resident of neighboring Rowley Ridges.

"They looked like they were sons of the owners and their friends."

Kiilu said a few hours after she got home, she saw television reports of the deaths along the street she uses daily.

Residents held a vigil Wednesday night outside the gas station where the three were killed.

"It was a huge group of people, just quietly holding candles," Kiilu said.

All this trouble is being caused by a huge group of lazy guys who can't be bothered to go out and get a job, and they suddenly see free things and decide to take advantage.
--Local resident Hilda Siviter
RELATED TOPICS

The victim's father, who addressed reporters hours after his son was killed, urged rioters to end the violence.

"Step forward if you want to lose your sons," he said. " Otherwise, calm down and go home. Please!"

As soon as he finished addressing the crowd, two sides started arguing, prompting police to step in and separate the groups.

"You guys have got nothing better to do, go home, men," the father told the two bickering sides.

A man has been arrested in connection with the deaths, which police are treating as a murder inquiry.

Birmingham, like many other areas in Britain, was roiled by riots that began Saturday, spurred by the shooting death of a man who protesters said was killed by police.

"I just want things to return to normal, this has just got out of hand," said Hilda Siviter, who lives in Bewdley, a small town near Birmingham.

"All this trouble is being caused by a huge group of lazy guys who can't be bothered to go out and get a job, and they suddenly see free things and decide to take advantage," Siviter said Thursday.

Lawmakers are concerned that rioters could use the opportunity to stir up tensions.

"What we don't want is for other elements to now hijack what's happened and make this something else and make this more serious," said Shabana Mahmood, the member of parliament for Birmingham.

In addition to the three deaths in Birmingham, police on Wednesday identified a man fatally shot in a vehicle in south London as Trevor Ellis.

Ellis died Tuesday, a day after he was shot in the head in Croydon, police said, without linking his death to the riots.

Initial inquiries indicate he had traveled with friends to the area, where a dispute ensued with a group of nine people.

The dispute led to a pursuit involving three vehicles, after which Ellis was shot, police said, appealing to witnesses to come forward.

Analysts say a mix of economic and social tensions has been at play in the unrest, with deprivation a key factor. The rioters and looters have been from diverse ethnic backgrounds and span a wide range of ages.

CNN's Dan Rivers contributed to this report from Birmingham, England.