Who are troublemakers behind UK riots? 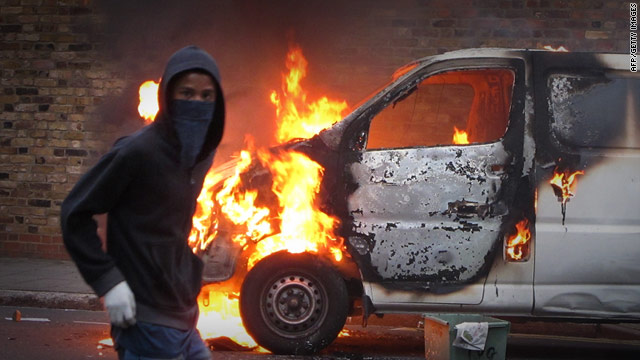 A masked youth walks past a burning vehicle in Hackney, London on August 8.
STORY HIGHLIGHTS

Those behind the masks have been demonized by some as opportunistic criminals from ghettoized communities dependent on welfare handouts.

London Mayor Boris Johnson said those involved were guilty of "wanton criminality" for which there was no justification. Right wing newspaper columns have blamed youngsters "who believe there is no need to work."

But academics and community leaders say the identities of those who have taken to the streets and their reasons for doing so are far more complex -- representing a tinderbox of economic and social tensions whose explosion was almost inevitable.

On the third night of violence across London, as police in riot gear fended off hails of missiles in streets filled with smoke from burning cars, it was clear their adversaries hailed from different backgrounds -- young and old, black and white.

Likewise, in retail parks where looters forced open the chain store security gates and helped themselves to flat screen televisions and sporting goods, both men and women could be seen running away with bags of stolen goods.

Says Paul Bagguley, a sociologist from the University of Leeds, while the identities of those involved may vary, different types of disorder tends to attract different social groups -- patterns he says matches previous uprisings in Britain.

"In terms of direct conflict with the police, it is mostly young men, but in terms of looting, it's more mixed -- young men and young women involved," he said.

Bagguley said, however, that those involved share low-income backgrounds, suggesting that while the violence may have been triggered by anger over a fatal police shooting last week, the long-term impact of the global economic downturn has helped fan the flames.

"I strongly suspect that it's people who are unemployed or on very low income who are involved in this. People are constantly bombarded with advertising and they see these shops full of goods they can't afford and would like to buy and are being encouraged to buy, there's a lot of that going on."

And, says University of Bedfordshire criminologist John Pitts, recent government youth service cutbacks and job losses in the public sector, a key employer in some of riot-hit areas, has exacerbated the situation.

"I think there's a mounting sense of discontent in those neighborhoods, which doesn't excuse it, but does go some way to explaining the animosity."

While many of those involved may be from low income households, Bagguley said it is too simplistic to class perpetrators as products of a benefits culture, an allegation often leveled by right wing commentators in Britain.

I think there's a mounting sense of discontent in those neighborhoods, which doesn't excuse it, but does go some way to explaining the animosity
--John Pitts, criminologist

Community leaders instead blame a sense of disenfranchisement felt by young people living in cities like London where disparities between rich and poor leave many feeling resentment towards authorities that fail to address their problems.

"Although produced by our consumerist culture, they have no stake or identification with this society, no interests and thus nothing to lose," says Symeon Brown, an activist and social commentator from Tottenham in London, where riots first took place on Saturday.

Lee Jasper, a prominent community leader in London agreed, saying it was wrong to categorize looters and rioters as criminals without taking into account simmering resentments -- not just about last week's shootings, but other perceived police wrongdoings.

"There is a tremendous anxiety, anger and demand for justice and that has triggered legitimate demonstrations," he said.

"You can dismiss them all as thugs, but if people think the solution to the problems we're seeing today is simply locking up thousands of people, I think they're mistaken.

"There are underlying causes which means that people in inner cities, who feel alienated and disconnected from wider society, don't have a stake in it and therefore see no reason to adopt its moral values."

This, says Bagguley, is compounded by the lack of alternatives for people whose lives are not defined by employment or family commitments -- perhaps due to their youth (and even, in some cases, because schools are now out for the summer).

"I think what's been happening is there are a lot of young people who are available and unoccupied, so it's not so much their sense of grievance about their situation, but that there's nothing else for them to do."