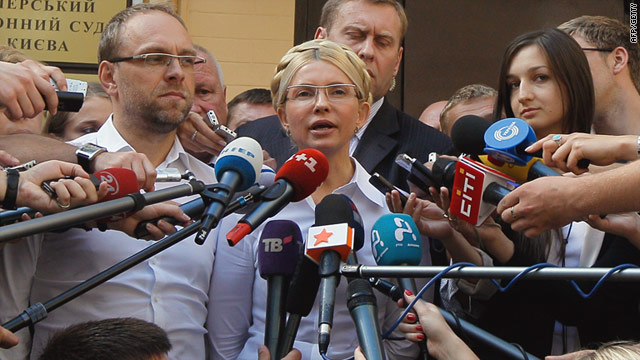 Moscow (CNN) -- Dozens of angry supporters of former Ukrainian Prime Minister Yulia Tymoshenko took to the streets in the country's capital Kiev following a court decision to take her into custody on Friday, Ukrainian media reported.

Judge Rodion Kireyev, presiding in the case of former Ukrainian prime minister in Kiev's Pechersky Court, supported the prosecution's motion for her arrest based on what he described as "systemic abuses by the defendant" and her "obstruction of the interrogation of witnesses," the national UNIAN newswire reported.

Tymoshenko, a prominent character of the 2004 pro-Western Orange Revolution and leader of the opposition party Batkivshchyna ("Fatherland"), is facing charges brought against her by the country's current government for her "abuse of power and unilateral decisions" made at a time when she was concluding natural gas supply and transportation contracts with Russia as the country's prime minister in January 2009.

In April, the Ukraine's Prosecutor General's office opened a criminal case charging Tymoshenko with signing overpriced gas deals with Gazprom that inflicted damages to the country of more than 1.5 billion hryvnas (almost $190 million at the current exchange rate) and which Tymoshenko had allegedly no right to sign. She could face up to several years in prison if found guilty.

She was banned from travel until Friday's court decision to place her in a detention facility.

Tymoshenko has repeatedly brushed off all charges against her as political, calling the trial a "farce" and naming the judge a "stooge of (President) Yanukovych's administration" appointed to "fabricate" the case.

"We follow the principle that (Yulia) Tymoshenko's trial must be fair and unbiased and meet all of the requirements of Ukrainian legislation, with the possibility of defense and compliance with the fundamental humanitarian standards and rules," according to a ministry statement.

Tymoshenko narrowly lost to Viktor Yanukovych in a presidential election in February 2010, and is now his fiercest opponent.

The trial against her is scheduled to resume on Monday.