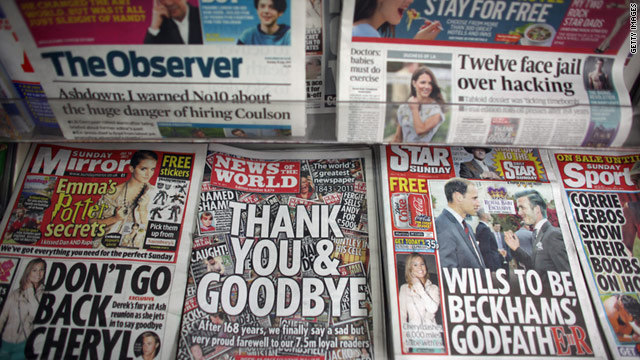 Copies of the last-ever News of The World newspaper on sale on July 10, 2011
STORY HIGHLIGHTS

London (CNN) -- The mother of a British girl whose murder spurred legislation to protect children says her phone was targeted by a private investigator working for the now-defunct tabloid that led the campaign for the new law.

Sara Payne, whose slain daughter was the namesake of Sarah's Law, said Thursday that police have confirmed unspecified "details" on a list kept by private eye Glenn Mulcaire, one of the central figures in the scandal that took down the 168-year-old News of the World earlier this month.

"Sara is absolutely devastated by this news, we're all deeply disappointed and are just working to get her through it," a statement from her literary agency said Thursday. "Sara will continue to work with the proper authorities regarding this matter. There will be a further statement in due course, but at this point in time, she (or we) can make no further comment."

Sarah's Law, which went into effect in 2008, allows parents to look up the records of convicted pedophiles. The News of the World led the crusade for the law for a decade and provided a mobile phone for Payne, the paper's ex-editor said Thursday.

Payne wrote a column in the paper's defense in its final edition, arguing the News of the World "has often been a force for good" and pointing out that earlier claims that it had hacked her phone "turned out to be untrue."

In Thursday's statement, Payne's representatives said police had informed her during an earlier probe of the allegations that Mulcaire did not have her information -- but a subsequent review found that he did.

News International, the now-shuttered tabloid's corporate parent, said Thursday that it "takes this matter very seriously and is deeply concerned like everyone."

"As the facts are established, the Company and the independent Management and Standards Committee will take all appropriate actions, including cooperating fully with any potential criminal enquiries or civil proceedings which may arise," it said.

And Rebekah Brooks, the former News of the World editor and News International chief who has been arrested as a result of the scandal, called the revelation "abhorrent and particularly upsetting as Sara Payne is a dear friend."

"The idea that anyone on the newspaper knew that Sara or the campaign team were targeted by Mr. Mulcaire is unthinkable," said Brooks, who touted the Sarah's Law campaign during her testimony to a House of Commons committee last week. "It is imperative for Sara and the other victims of crime that these allegations are investigated and those culpable brought to justice."

News of the World provided Payne with a mobile phone for the past 11 years as part of the campaign for Sarah's Law, and "The idea of her being targeted is beyond my comprehension," Brooks said in a statement regarding the allegation.

Brooks was arrested and released on bail a week after the tabloid closed. She has not been charged with a crime, however, and her lawyer says she is not guilty of any offense.

News International is the British arm of media mogul Rupert Murdoch's News Corp., which also owns the Fox television and cable networks and the New York Post in the United States. Murdoch and his son James also faced questions about the scandal last week from the same committee that grilled Brooks, and James Murdoch is among three witnesses who are being recalled for further questions Friday, a member of that panel, Tom Watson, told CNN.

Thursday's disclosure was the latest twist in a scandal that has reverberated across the highest levels of the United Kingdom, featuring allegations of widespread phone-hacking, bribery of police officers by journalists and a bungled initial probe.

Journalists at News of the World are accused of bribing police to get private details about people, including members of the royal family. The scandal has led to the arrests of several reporters and the resignations of the two top officers of London's Metropolitan Police Service.

A British judge launched a new inquiry into the scandal Thursday, saying the probe would start ordering people to testify and hand over documents "as soon as possible." The judge, Brian Levenson, said the inquiry would try to deliver its initial report within a year, as instructed, despite the wide range of subjects it's supposed to cover.

Prime Minister David Cameron announced the inquiry July 13 in response to public fury at the accusation that people working for News of the World illegally hacked into the phone of a missing British schoolgirl who was later found dead. And London's Metropolitan Police are running two investigations, one into the allegations of hacking and one into charges of police bribery.