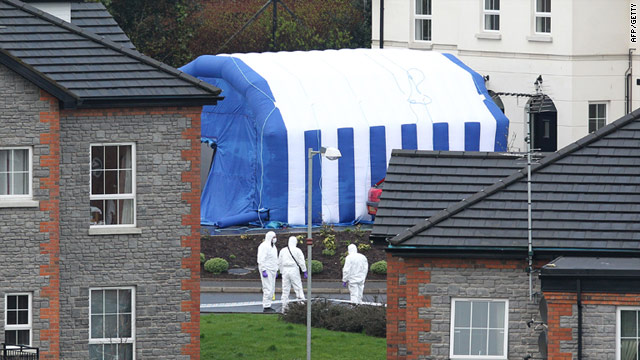 Officer Ronan Kerr died April 2 when an explosive device detonated under a car in the Highfield Close area of Omagh.
STORY HIGHLIGHTS

Belfast, Northern Ireland (CNN) -- Authorities have arrested five more people in connection with the death of a police officer in a car bomb blast last April, during operations across Northern Ireland Tuesday.

Officer Ronan Kerr died April 2 when an explosive device detonated under a car in the Highfield Close area of Omagh. The 25-year-old had only recently joined the Police Service of Northern Ireland, Assistant Chief Constable Drew Harris said at the time.

"Today's activities are the latest stage in the ongoing investigation into Ronan's murder and related incidents," said Detective Superintendent Raymond Murray. "Our determination to pursue every possible line of enquiry remains undiminished."

With Tuesday's arrests, Police have detained a total of nine people, although only one has been charged in connection with the investigation, but not the murder.

A 33-year-old man from Omagh was charged after an arms and explosives find in Coalisland, County Tyrone. He was arrested by detectives investigating the Kerr murder.

Northern Ireland was the scene of frequent violence between pro-Irish and pro-British forces over a period of three decades.

About 3,500 people were killed before a power-sharing deal known as the Good Friday Agreement was reached in 1998.

In August of that year, Omagh was the scene of the conflict's most deadly terrorist attack in which a car bombing by the paramilitary splinter group Real IRA killed 29 people.