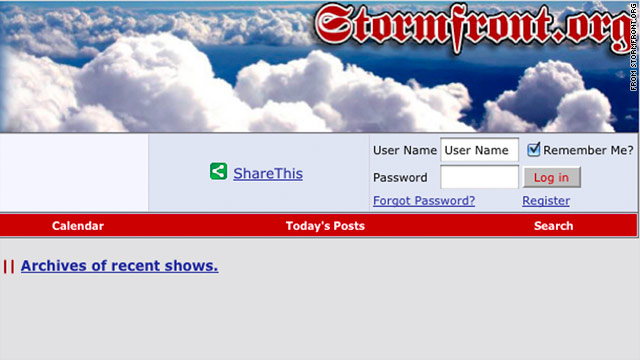 This a screen grab from the website stormfront.org, whose motto is "White Pride Worldwide."
STORY HIGHLIGHTS

(CNN) -- The far right in Europe has enjoyed a renaissance over the past 30 years, driven by resentment of the growing powers of the European Union and by rejection of the "multiculturalism" that has accompanied rapid immigration from the developing world.

Political parties opposing immigration and integration have done well in elections in recent years -- and beyond them, neo-fascist and "national socialist" groups have become well-established across the continent, including in Germany, Belgium, the Netherlands, Italy, Scandinavia, Hungary and the United Kingdom.

Most of those belonging to such groups would not contemplate the sort of carnage that occurred in Norway on Friday, but they would probably sympathize with what appears to have been the manifesto of the alleged assailant, Anders Behring Breivik.

Breivik claimed that "cultural Marxism" had morally degraded Europe, and purportedly wrote: "You cannot defeat Islamisation or halt/reverse the Islamic colonization of Western Europe without first removing the political doctrines manifested through multiculturalism/cultural Marxism." Elsewhere he said: "One of the most widespread manifestations of the craziness of our world is multiculturalism."

More views on Norway and multiculturalism

There are plenty of white supremacists who subscribe to such views on websites like stormfront.org, whose motto is "White Pride Worldwide." On the site's discussion forums, one thread entitled "Scandinavia Struggles Against Multiculturalism" warns that "a united Europe could become a strong wall against Islamic 'cultural' invasion, but instead Europe has become a gateway for Islam." The thread, which has been active for several years, contains reports of alleged rapes by immigrants, warns about the low birth rate of native-born Scandinavians and links to videos of far-right protests.

Another thread is titled: "Please Nordic people, keep white Scandinavia." And the day before Friday's attack, one forum participant wrote: "Norway must wake up and deport non-whites."

In his own writings, the alleged Norwegian bomber appears to have complained about the "Muslim ghettofication process'" in Oslo -- a term also used by the far right in Denmark.

Without espousing such apocalyptic views, far-right political parties in Scandinavia have tapped into this anger -- and reaped dividends at the ballot box. The far-right Danish People's Party (Dansk Folkerpartis) has 25 seats in parliament; the Sweden Democrats Party won 5.7% of the vote in the 2010 election. In Finland, the True Finns party made a dramatic breakthrough in April's elections, gaining more than 1 in 5 votes.

Beyond Scandinavia, France's National Front won 15% of votes in the first round of regional elections in March 2010, even though it was not on the ballot in the entire country. President Nicolas Sarkozy's party only managed 2% better.

In the Netherlands, Geert Wilders (a politician admired by Breivik in his writings) has successfully stirred up hatred against Islam and the establishment; his Party for Freedom has become the country's third largest, with 24 seats in the Dutch parliament. Wilders has compared the Quran to Hitler's Mein Kampf and has tried to have it banned in the Netherlands.

And in 2009, the British National Party won enough votes to send two members to the European Parliament, a result that profoundly shocked the political establishment in the UK.

Most of these parties and other far-right groups in Europe oppose freedom of movement within the European Union as enshrined in the Schengen Agreement. And that's an issue that's bled into mainstream politics, with the conservative governments in France and Italy embarking on controversial campaigns to deport Roma -- or gypsy -- communities accused of raising the crime rate.

In May, Denmark reintroduced unilateral border controls to combat illegal immigraion and organized crime, a measure championed by the Danish People's Party.

Issues of open borders and immigration are now very much part of Europe's crisis, which includes doubts over the very future of the financial eurozone. The Scandinavian far-right parties have opposed European financial bail-outs to weaker members like Greece and Portugal -- a real threat when such deals must win unanimous approval among the 27 members of the European Union. As the conservative German newspaper Die Welt put it in May: "Neither open borders nor a common currency have led the countries to grow closer with one another. It's just the opposite. They insist on clinging to their national characteristics."

Established far-right politicians -- from Wilders to Marine Le Pen, leader of the National Front -- have quickly and unequivocally condemned the attack in Norway. Siv Jensen, leader of the far-right Norwegian Progress Party (to which Breivik once belonged) said: "The horrible and cowardly attacks we've witnessed are contrary to the principles and values underpinning the Norwegian society."

But beyond these established parties lurks an underground of white supremacists and neo-Fascists. These groups, which dissolve, mutate and reform with great frequency, typically are comprised of younger men with little education and poor if any job prospects. They see their lives as blighted by an overbearing state, Europe's post war "social democratic model" and the rising tide of immigration from Africa and South Asia. Racist skinhead gangs in Italy, Poland and the United Kingdom have often been organized around "support" for football clubs.

The ideologues among them foresee -- much like the alleged Norwegian bomber appears to -- an economic apocalypse that will generate armed resistance in Europe. And today, like would-be jihadists, white supremacists and others on the far right can quickly find contacts and reinforcement on a host of websites and online discussion forums.

The use of violence by the far right in Europe is not new, and dates back to the late 1970s. In 1980, a 27-year old German named Gundolf Koehler exploded a bomb at the Oktoberfest in Munich, killing himself and 12 others. Documents were found on Koehler's body linking him to the paramilitary Defense Sport Group (Wehrsportgruppe) led by Karl-Heinz Hoffmann, who saw himself as the "spiritual descendant" of Hitler. Koehler is believed to have acted alone.

In the 1990s, neo-Nazis in Germany, often acting alone, attacked a number of immigrant hostels housing Turkish families. A firebombing in 1993 killed two Turkish women and three children; and in 2000 10 immigrants, most of them Jewish, were injured in a bomb attack in Dusseldorf. Towns like Guben in eastern Germany became notorious for attacks by skinheads on asylum-seekers -- Algerians, Africans and Turks.

The German government tried to ban the far-right National Democratic Party in 2003, using a clause in the constitution outlawing neo-Nazi parties. But the Constitutional Court refused to hear the case because the government had inflitrated the party with informants. Insisting it rejected violence, the NPD won 5% of the votes in Saxony's state elections in 2009.

Germany's intelligence service recently estimated there were 25,000 far-right extremists in the country and that the number of far-right crimes in the former communist east had risen by an alarming 40%. Neo-Nazi groups like Sturm 34 remain active in parts of Germany.

Individuals belonging to or sympathizing with far-right groups in Europe have carried out fire bombings or knife attacks against immigrants, gay and Jewish targets, but there is no precedent for an attack of the magnitude that occurred in Norway on Friday -- which now appears to have been the result of long, meticulous planning. (Ironically, the alleged bomber appears to have learned from al Qaeda's methodology in planning attacks, and purportedly wrote: "Just like Jihadi warriors are the plum tree of the Ummah, we will be the plum tree for Europe and for Christianity.")

The only previous occasion when carnage in Europe on such a scale has been blamed on the far right came in Bologna, Italy, in 1980, when 85 people were killed in a massive bomb explosion at the city's railway station.

The Nuclei Armati Rivoluzionari, a faction of the far-right group Terza Posizione (Third Position), which had emerged from the ashes of other neo-Fascist groups, claimed responsibility for the attack. At the time, far-right groups in Italy had links with the Italian secret service, which saw them as a tool in the fight against communism. Italy then had the strongest Communist Party in western Europe. A Rome magistrate that had been investigating the group was assassinated weeks before the Bologna bombing.

But Terza Posizione was driven by an ideological struggle peculiar to Italy. Thirty years on, the prevailing tone -- online and off -- of neo-fascist groups is what they perceive as the Islamization of Europe, and the acceptance of the political establishment of multiculturalism, which may help to explain why the targets in Norway were linked to the ruling Labour Party.

For generations, politics in Europe has been defined in terms of class: the contest between left and right, socialists against conservatives or Christian Democrats. It is still the prevailing divide, but recent election results and the resurgence of far-right groups suggest the issue of identity is beginning to intrude.