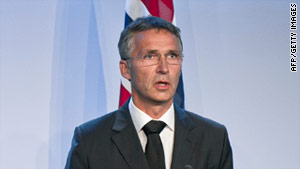 Norwegian Prime Minister Jens Stoltenberg spoke at a news conference Saturday about the two-pronged attack on his country the previous day -- a shooting at a youth camp that killed at least 85, and a bomb targeting government buildings in the capital, Oslo, that killed seven. The following is a transcript of his speech:

Last night, it became apparent that what happened at the Labour Youth League summer camp on Utøya yesterday was a national tragedy. Not since the Second World War has the country experienced such an atrocity.

At least 80 young people have been killed on Utøya. We have also lost some of our colleagues in the government offices.

A nightmare for the young people who have been killed. For their families. Mothers, fathers, brothers and sisters who have been brutally confronted with death.

But also for the survivors and their families. Every single person on Utøya has been marked for life.

Young people have experienced things that no one should have to experience. Fear, blood and death.

I am unable to express with words how deeply I feel with all who have been hit.

Today -- in a few hours' time -- I should have been at Utøya to meet these young people. Many of them are no longer alive.

For me, Utøya is the paradise of my youth that yesterday turned into hell.

Now we have to do all we can to support and help those who have been stricken by grief.

Many people are still working to save lives. I visited Oslo University Hospital last night and applauded the outstanding work the health personnel are doing there.

We also extend our thanks to the teams of police and firemen, and many others who are doing a tremendous job. Volunteers have also offered their help.

Everyone is doing an impressive job. I appreciate this. We all feel a need to contribute, talk together and take care of each other.

Last night, I talked to the leader of the Labour Youth League Eskil Pedersen. He is doing everything he can to comfort and assist everyone who has been hit.

Foreign Minister Jonas Gahr Støre and Minister of Culture Anniken Huitfeldt were at Sundvollen last night and in the early hours to support the young people arriving from Utøya and their families.

Many people are still waiting for answers.

Later today, I will go to Sundvollen to meet these young people and their families.

Early this morning, there will be a meeting of ministers who are most immediately affected, and the whole Government will meet later today.

Flags will be flown at half mast today to reflect the grief of the whole nation over this terrible tragedy.