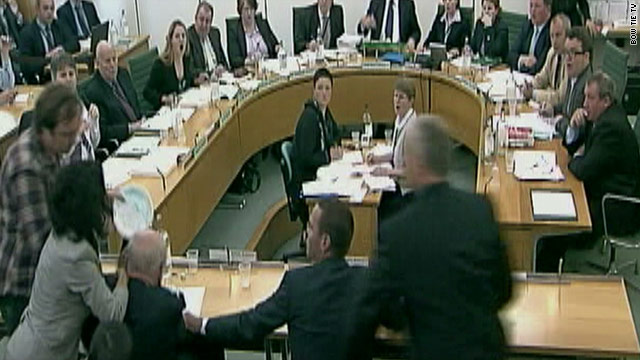 Rupert Murdoch was attacked by a man apparently carrying a plate full of light blue shaving foam, but seems to be unhurt.
STORY HIGHLIGHTS

London (CNN) -- When a protester planted a plate of cream in the face of Rupert Murdoch, sustaining a ferocious slap from Murdoch's wife Wendi Deng in the process, he joined a long tradition of activists who have made their mark with pie.

Throwing foam pies has been a way of scoring easy laughs since the slapstick rule book was written in the days of silent movies. But in recent years it has also become a popular, if unorthodox, method of registering protest.

The act of pieing, though usually attracting condemnation, has the potent effect of humiliating its victim and -- as the Murdoch incident proved -- creating a spectacle without causing injury. Most assailants escape with minor charges.

Politicians, celebrities and royalty have all endured foam strikes -- or in some cases actual pies made with pastry and fruit -- so Murdoch can take comfort in the fact that he is in celebrated, if not necessarily illustrious, company.

King Carl XVI Gustav
Sweden's monarch was hit in the face with a strawberry tart thrown by a 16-year-old boy in September 2001. The motive for the attack was not reported at the time. The king escaped without injuries. In an echo of Wendi Deng's actions, Queen Silvia reportedly helped wrestle the youth to the ground.

Nicolas Sarkozy
In 1997, a decade before he was elected French president, Sarkozy was entarté by Belgian serial pie-thrower Noel Godin. Video of the incident shows that Sarkozy, then the mayor of Parisian suburb Neuilly-sur-Seine, is visibly annoyed by the attack. He barely breaks stride but is seen tetchily waving away a photographer. The pie doesn't appear to be a factor in his political success. Segolene Royal, who unsuccessfully challenged Sarkozy for the presidency, was also a pie victim in 2006.

Bill Gates
This attack, another chalked up to Godin, saw the Microsoft billionaire receive no less than four face-fulls of foam while on a visit to Brussels in February 1998. Godin and several accomplices tackled Gates as he walked from his limousine to a nearby building. Video footage shows Gates recoiling from the attack, which stops him his tracks. In an interview, Godin is quoted saying the operation was planned using information from a Microsoft insider.

Jean Chretien
In August 2000, then prime minister of Canada Jean Chretien was hit in the face by a pie nonchalantly delivered by 23-year-old Evan Brown. Chretien reportedly dismissed the incident with a joke, saying the region of Canada he was visiting had a "funny way of serving pies." Law enforcers took a sterner view, arresting and sentencing Brown to a month in jail. Demonstrators take on Chretien at their peril. In 1996 he grabbed an anti-poverty protester by the throat during a walkabout in Quebec.

Carl Levin
Senator Carl Levin was holding a town hall meeting in a café in his home state of Michigan when an apple pie wielded by a 22-year-old student struck him in the face. The student, named at the time as Ahlam Mohsen, currently faces a charge of assault. Levin, who wasn't hurt, reportedly joked after the incident that he prefers blueberry pies.

Anita Bryant
Bryant, a popular singer who became a prominent U.S. gay rights opponent, was struck in the face with a pie during a television interview in Des Moines, Iowa in 1977. Bryant seemed initially unfazed by the incident, quipping: "at least it's a fruit pie," but subsequently burst into tears as she prayed for her attackers. One report said Bryant's husband later found her assailants outside the studio and retaliated with a banana cream pie.

Ralph Nader
Former U.S. presidential candidate Ralph Nader offered a master class in how to react to a pie strike when he was hit in September 2003 at a political event. With lightning reactions, Nader picks up the pie and flings it back at his unidentified attacker.