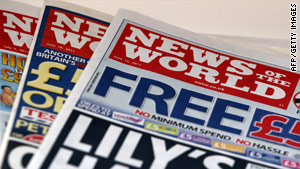 The 168-year-old News of the World published its final edition on July 10 as a result of the phone hacking allegations.
STORY HIGHLIGHTS

(CNN) -- The phone-hacking scandal began two years ago as a lonely newspaper crusade in London, but when Rupert Murdoch testified Tuesday before British lawmakers, the story undeniably took the world by its ear with coverage spanning from Al Jazeera to Brazil to China, media experts said.

Social media such as Twitter also showed the scandal as a hot topic, cited under the hashtag shorthand of "notw" for News of the World, the Murdoch publication that was shut down this month because of phone-hacking allegations, experts said.

"It's really more than just a plain media story," said Mallary Tenore, associate editor at Poynter.org, the website at the Poynter Institute, a nonprofit school for journalists. "It's expanded far beyond that because of the legal implications of it and the fact that it involved police being paid for information and journalists not following ethical standards."

Tenore has been chronicling how the Guardian newspaper first began exposing the News of the World misconduct, without seeing any ripple effect.

Then this month, the Guardian reported that the hacking extended to the phone of 13-year-old Milly Dowler, a missing schoolgirl in 2002 who was later found dead -- shocking the United Kingdom because the News of the World allegedly deleted voice mails to make room for new messages, creating the illusion that the girl was still alive.

"The fact that this story had so many different legs and caused harm to so many people, it's not surprising it's gotten so much attention," Tenore said. "It speaks to the importance to having overseas bureaus."

Al Jazeera had its own version about how Murdoch and his son, James, an executive in his father's company, were also "on trial" in a court of public opinion in which "a global audience is hanging on their every word."

But one place where the story has been lacking for attention recently has been Murdoch's flagship Fox News, according to progressive media watchdog Media Matters.

Up until six days ago, Fox News had been covering the scandal less than half as frequently as competitors CNN and MSNBC, but by this weekend, Fox News had picked up its coverage, said Media Matters' executive vice president, Ari Rabin-Havt.

By Wednesday, Media Matters is scheduled to update its count of news segments on the scandal as aired by Fox, CNN and MSNBC, and that update should reflect increased coverage by Fox News, Rabin-Havt said.

But between July 4 and July 13, Fox ran only 30 segments about the phone-hacking controversy compared with MSNBC's 71 and CNN's 108, according to Media Matters.

Those figures were the subject of CNN's "Reliable Sources" on Sunday, in which host Howard Kurtz stated: "Fox News loves a good scandal, but when it involves the parent company, not so much. The network owned by Rupert Murdoch has tread lightly when it comes to the phone-hacking debacle at Murdoch's British paper."

During that show, Guardian editor Alan Rusbridger described how his paper's story was initially ignored.

"There was a moment in, around the end of 2009, when nobody was biting. The police had really put the story to bed by coming out and denying it all," Rusbridger said. "The regulator -- we have these quaint things called regulators, press regulators, in Britain -- they said there was nothing in it. And no other papers were following it up."

But his paper persisted. "Nick Davis, our reporter, was very determined, and I knew he was never going to give up," Rusbridger said.

By Tuesday, experts noted a significant increase in Twitter traffic about the imbroglio, though the postings weren't as great as the Super Bowl or the recent prognostication about the end of the world.

"The hashtag of 'notw' is very dominant, at least in my feed," said Robert Hernandez, assistant professor of professional practice at the communication school of the University of Southern California. "That's the thing about this story: it keeps growing and growing, with Rebekah Brooks resigning and her being arrested and the head of police resigning.

"What's interesting is the power of the press and how it can be soiled and compromised," Hernandez added. "It's really important to have good, solid journalists to hold politicians accountable and how it's important to do journalism through ethical means. It's a shame that it has to happen: It's a little bit of bloodletting. You have to purify the process."

Luis Manuel Botello of the International Center for Journalists, a nonprofit that trains journalists worldwide, said that Brazil has recently launched a phone-hacking inquiry into a journalist there who allegedly broadcast confidential police recordings. Botello is concerned, however, that the inquiry could be an effort to censor the press.

"There's a Brazilian journalist who's now being investigated for hacking into phone voice mail," said Botello, senior director of special projects at the center. "(It) could be that governments could take advantage of the situation to start going after news organizations. That's what scares me."

Still, Botello was surprised by how media outlets across the globe are tweeting about the London scandal.

"I'm getting tweets from all over the world, and it's amazing. They were tweeting in different languages," said Botello, who added he was interviewed recently about the scandal by the Latin American TV network NTN24, based in Colombia.