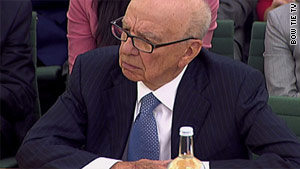 Media baron Rupert Murdoch blamed "the people I trusted and the people they trusted" during testimony Tuesday.

London (CNN) -- The following are highlights from the testimony given Tuesday by media baron Rupert Murdoch and his son, James, before a Parliament committee investigating phone hacking by journalists working for the Murdoch media empire:

On allegations of phone hacking:

• Rupert Murdoch said he has seen "no evidence" that employees of his company hacked the phones of 9/11 victims or their families, and does not believe it happened.

• James Murdoch said he had "no knowledge" that former News Corp. senior officials Rebekah Brooks and Les Hinton -- both of whom have resigned in the past week -- knew of the extent of phone hacking at the News of the World tabloid.

• Rupert Murdoch denied feeling responsible for illegal phone hacking carried out by his employees, answering a lawmaker's question simply: "No."

• Rupert Murdoch said he was "absolutely shocked, appalled and ashamed when I heard about the Milly Dowler case only two weeks ago." He added that "I was graciously received" by the Dowler family last week. Milly Dowler was a missing girl whose phone was allegedly hacked. She was later found dead. Revelations that journalists working for News of the World eavesdropped on her phone and deleted some of her messages to make room for more brought the scandal, which had been simmering for years, to a boil.

Where News Corp makes its money

• News Corp. paid "certain legal fees" for private investigator Glenn Mulcaire, the figure at the center of the phone-hacking scandal, James Murdoch said, adding that he was "as shocked and surprised as anyone" to learn that.

• Pressed to admit that a News Corp. out-of-court settlement with English soccer executive Gordon Taylor was for illegal activity, James Murdoch conceded the point, saying damages were paid "for the illegal voice mail interception." Rupert Murdoch learned of the out-of-court settlement over phone hacking only after the deal was made, James Murdoch said. News Group Newspapers paid a $1.13 million (£700,000) settlement to Taylor, whose phone was hacked by Mulcaire.

• James Murdoch said he had "no evidence" that Brooks and Hinton did anything wrong.

• Rupert and James Murdoch refused to say how much Brooks and Hinton were paid when they resigned over the scandal.

• Rupert Murdoch said he is not ultimately responsible for "this fiasco" despite being responsible, as the lawmakers reminded him, for corporate governance. He blamed "the people I trusted and the people they trusted."

On what Rupert Murdoch knew and didn't know:

• Rupert Murdoch said senior executives of News of the World were "not ever" guilty of "willful blindness," or choosing not to be aware of damaging information they should have known.

• Rupert Murdoch denied he had been told that a British parliamentary committee investigating phone hacking had found senior executives of his News Corp. were guilty of "collective amnesia," and pressed back against questioning by lawmakers, saying, "What you're really saying is that they lied."

• Rupert Murdoch said the disgraced Sunday tabloid News of the World accounted for less than 1% of his News Corp., which employs 53,000 people around the world.

• Rupert Murdoch said he seldom called the editor of News of the World, but did so sometimes on a Saturday night to find out "what the news was." He says he rang the Sunday Times editor almost every Saturday.

• Rupert Murdoch said he wouldn't expect to be told in conversations about payouts to victims of phone hacking in amounts of hundreds of thousands of pounds. He said conversations would often be just about the sports pages.

• Rupert Murdoch, taking long pauses, said no one brought to his attention the fact that Neville Thurlbeck, a senior News of the World reporter, had been found guilty of trying to blackmail women. He also said he did not investigate after former News of the World editor Rebekah Brooks said the newspaper paid police.

• Asked why News International executives said at previous appearances before select committees that there was no evidence of illegality, James Murdoch said the company relied on a police investigation in 2007 and subsequent inquiries. He said he can't say exactly what they knew, but key facts only emerged from civil trials at the end of 2010.

• Rupert Murdoch said he has never promised a British political party the support of his media empire, in response to a question as to whether he ever demanded specific actions in exchange for support.

• Rupert Murdoch said British Prime Minister David Cameron asked him to visit the prime minister's official residence at 10 Downing Street after the last general election to thank him for his support. He went in the back door, saying, "I did what I was told."