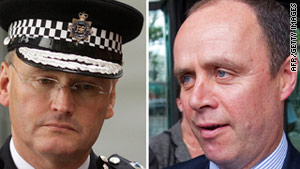 London (CNN) -- London's outgoing police commissioner denied Tuesday that he put pressure on the Guardian newspaper in 2009 to drop its investigation into the News of the World phone-hacking scandal.

Commissioner Paul Stephenson said he was relying on assurances from his deputy -- Assistant Commissioner John Yates -- that there was nothing new in a series of 2009 Guardian articles detailing a phone-hacking scandal that was significantly more expansive than had been previously reported.

"They seemed to disagree," Stephenson said of the newspaper's editors. "So it seemed entirely appropriate ... that I meet with them and actually represent to them what I was being told, and that is that this was nothing new, and I had no reason to doubt the first inquiry," he said.

Stephenson and Yates both testified Tuesday before Parliament, on a day that also saw testimony from media baron Rupert Murdoch before another parliamentary committee. Rupert's News International subsidiary and its now-defunct News of the World newspaper are at the heart of the scandal, which has rocked the country's political, media and law enforcement establishments.

Both have been referred to Britain's Independent Police Complaints Commission, in part for investigation of their role in failing in 2009 to order a deeper investigation into the phone-hacking scandal. Reporters have been accused of improperly accessing private voice messages and paying police for what should have been confidential, restricted information.

Murdoch shut down the News of the World last week after the scandal broke wide open.

Stephenson and Yates have resigned, denying wrongdoing but saying their continued presence would pose a distraction to London's Metropolitan Police as the city prepares to host the 2012 Summer Olympics.

Yates told the committee that he would have ordered a thorough investigation in 2009 if he had had knowledge of the scope of the alleged misconduct.

"If I had known then what I know now ... I would have made a completely different decision and none of us would be where we are now," he told the committee.

As it was, Yates said, he and the officers he assigned to look into the matter found nothing new in a pivotal July 2009 Guardian article disclosing the scope of the hacking, which predominantly involved improperly accessing voice message systems of public figures and subjects of news stories.

A News of the World reporter and a private investigator were convicted and sentenced to prison for their role in the hacking.

Yates said that at the time, he evaluated the case as something that had already been through legal review and the courts, resulting in prison sentences. He said investigators did not have sufficient evidence to persuade a judge to give police the power to demand that News of the World hand over additional evidence.

Stephenson and Yates also testified about their role in hiring a former News International executive, as well as Yates' role in securing a job for the man's daughter.

The Met hired former News of the World executive editor Neil Wallis -- whom Yates described as a friend -- for a public relations post.

Stephenson pushed back against suggestions that it had been wrong for the Metropolitan Police to hire Wallis -- who was arrested last week over the scandal -- as a communications consultant, saying he had no reason to doubt him.

Asked about the decision not to tell British Prime Minister David Cameron about Wallis' contract, he said it had been driven by concern that it might appear improper, given the prime minister's close relationship with Coulson, who had worked with Wallis.

"My understanding is, and I think it's a very sensitive position, that actually a senior official in No. 10 guided us that actually we should not compromise the prime minister, and it seems to me to be entirely sensible," Stephenson said.

Cameron's office at 10 Downing Street declined Tuesday to comment on that claim.

Police director of communications Dick Fedorcio also testified, saying Yates had "done a form of due diligence" on Wallis and he had no reason to doubt Yates' integrity.

Yates in turn denied that he had done due diligence on the hiring of Wallis -- whose connection to the scandal led to the resignation of Stephenson -- saying Fedorcio's claim that he had blessed the contract was "over-egging the pudding, to put it mildly."

Instead, Yates said, he had only extracted assurances from his friend that nothing troubling was lurking in the former journalist's record.

"I received categorical assurances that was the case," he said. "I didn't have a scintilla of concern in 2009."

Yates also downplayed his role in securing a job for Wallis' daughter, saying he had only acted as a conduit to pass the woman's resume to human resources officials.

"I had absolutely nothing to do with her employment," he said. "I was simply a postbox."

The continuing scandal has reached to the top of Britain's government, forcing Cameron to cut short a trip to Africa to return and address the issue.

So far, 10 people, including Wallis and former News International executive Rebekah Brooks, have been arrested in a multi-pronged investigation into the scandal.

On Tuesday, Home Secretary Theresa May announced that Her Majesty's Inspectorate of Constabulary would conduct a review of allegations of corruption among the nation's police related to the scandal, and said the Independent Police Complaints Commission could get new resources and powers as a result of the situation.

The Met has endured numerous scandals in its 182-year history.

In 1977, the head of the department's armed robbery squad and 12 other detectives were jailed for accepting bribes. Leaders of a later six-year investigation of police corruption in the department complained of high-level resistance within the department, and were able to secure few prosecutions.

The 1990s saw scandals related to active and retired detectives being accused of links to organized crime and drug dealers, and the department has faced frequent criticism over its handling of civil unrest, racial issues and terrorism.