How did Rupert Murdoch perform? Experts give their verdict 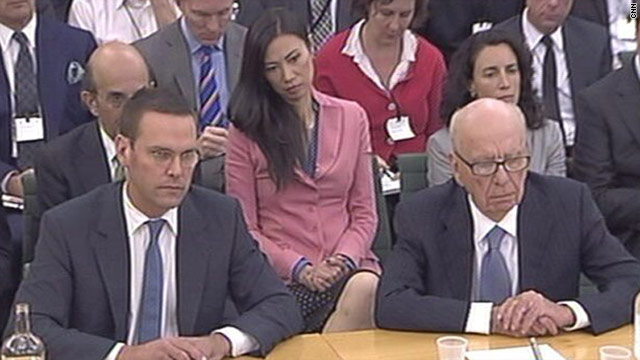 While they were not under oath, the select committee appearance was an opportunity to put three of the company's most powerful players -- from the time of the hacking scandal -- on the spot.

So, did politicians draw blood from what has been called the "Wapping Three?" -- a reference to the company's London base. Three experts give their verdict and explain what it means for the beleaguered organization.

THE LAWYER
Media law expert Geoffrey Robertson is a founder and head of Doughty Street Chambers, the UK's leading human rights practice. He has argued many landmark cases in media law and has represented, among others, Salman Rushdie, Mike Tyson and Julian Assange.

The select committee did badly in cross-examination
--Geoffrey Robertson, lawyer

On the Murdoch's approach: "The strategy of the Murdochs was clearly to let James do all the talking."

On the politicians's line of questioning: "The select committee did badly in cross-examination, they were feckless, they didn't get at much truth."

The phone hacking scandal: The figures at the center of it

On Murdoch's response to being asked if NOTW hacked 9/11 victims' relatives phones: "Their strategy today, Rupert Murdoch's strategy was to say: I saw no evil, I heard no evil. Everyone lied to me. I was kept in the dark. This is just 1% of my vast corporation. I'm not responsible. Everyone else is responsible.

Broadcaster Michael Cockerell is the British Broadcasting Corporation's most established political documentary maker. Starting as a reporter on the flagship current affairs program, Panorama, he now specializes in in-depth portraits of the powerbrokers in UK politics.

This was a chance for (MPs) to get their pound of flesh, to get their own back, to get revenge
--Michael Cockrell, political documentary maker

On politicians getting their own back: "There's a huge level and well of resentment among British MPs against the media (following the expenses scandal broken by British daily newspaper The Daily Telegraph). This was a chance for them to get their pound of flesh, to get their own back, to get revenge."

On how the Murdochs fared: "... It was a defensive display. I don't think the MPs really managed to nail the Murdochs. On the other hand I do (think) that the rather imperial approach that Murdoch has ... the Sun King that successive British prime ministers have worshipped, was showing signs of mortality."

On Rebekah Brooks: "Rebekah Brooks knows more than anyone. She knows where the bodies are buried. She was editor of The News of the World when Andy Coulson was her deputy. She then became editor of the Sun, she then became chief executive of News International. So she knows how journalism works.

Hacking row: Who is Rebecca Brooks?

"There was no mention in this meeting today of how journalism works on the front line and how it works as far as the editor is concerned -- what the editor really knows of his or her staff is up to. Those kind of questions will need to be asked of Rebekah Brooks but she may say that because she has been arrested, that because there is an ongoing police investigation that she can't answer them as fully as she would like."

(News Corp) can come back from this but it will take 20 years
--Allyson Stewart-Allen, corporate expert
RELATED TOPICS

On how the Murdochs came across: "If you look at all of the comments they made over the course of the past three hours, what comes out loud and clear to me are two executives who appear profoundly out of touch."

On News International using private investigators: "Some of the statements that we heard earlier (from Rupert Murdoch) ... "All news organizations use private investigators," as if that legitimizes the practice. "No, I'm not responsible for the fiasco. I trusted people." Well, excuse me, the chief executive of a company is responsible, so Mr. Murdoch, both Mr. Murdochs, need to own what has happened in their organization. The culture is clearly broken."

On enforcing good corporate governance: "It's one of the things that's interesting about this situation -- if you think about Mrs. Brooks' history, she is born and bred within the stable of News International and so in terms of promulgating a culture that is abiding by these codes of ethics we've heard about countless times over the past few hours ... there are processes, there are codes of conduct, there are rules but interestingly where has the enforcement actually been made to make sure those rules are actually abided by by senior leaders in this business and from what I've heard today I can't actually say that the company is showing evidence of that."

On whether they've contained the infection: "I think that there's still many more weeks to run of this. It's so monumental: the scale, the scope. They hope that by retiring the News of the World brand, that the infection has been contained. I believe it's much more widespread -- it perhaps is an industry-wide practice.