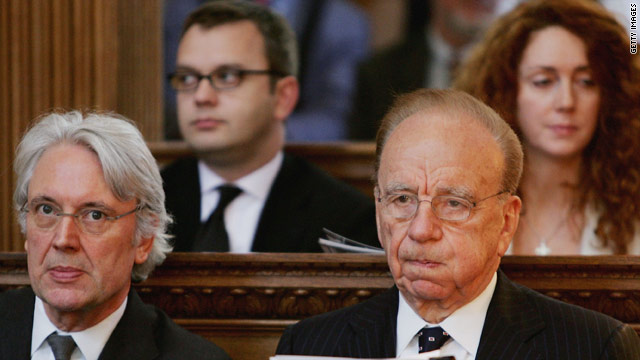 London (CNN) -- Rupert Murdoch apologized to the British public with full-page advertisements in seven national newspapers Saturday, a day after two senior executives resigned over a phone hacking scandal that has engulfed his media empire.

"We are sorry," Murdoch says in Saturday's ad, which will also run in newspapers Sunday and Monday.

"The News of the World was in the business of holding others to account. It failed when it came to itself. We are sorry for the serious wrongdoing that occurred. We are deeply sorry for the hurt suffered by the individuals affected."

Phone hacking scandal: The week that was

Murdoch also visited the family of Milly Dowler, a murdered British teenager whose voice mail was allegedly hacked by staff working for the News of the World.

Police in the United Kingdom have identified almost 4,000 potential targets of phone hacking in documents recovered from a private investigator working for the paper.

There were also allegations that News Corp. reporters may have bribed police officers.

Murdoch's campaign of contrition comes 12 days after the scandal first broke and barely a week after the News of the World, Britain's best-selling Sunday tabloid, was shut down by News International in the face of public outrage.

The advertisement expresses regret for not acting more quickly "to sort things out," but Murdoch acknowledges that apologizing is not enough.

"Our business was founded on the idea that a free and open press should be a positive force in society. We need to live up to this," he says.

"You will hear more from us," his message concludes.

Murdoch, his son, James, and Brooks are to appear before British politicians Tuesday to answer questions over the phone hacking scandal.

Some of the claims Brooks faces relate to the News of the World's alleged hacking, while she was editor, into Dowler's mobile phone account. She has warned that her answers may be limited by ongoing police and judicial inquiries.

"As chief executive of the company, I feel a deep sense of responsibility for the people we have hurt, and I want to reiterate how sorry I am for what we now know to have taken place," she said in a statement Friday.

Hinton, who most recently served as chief executive of Dow Jones, publisher of The Wall Street Journal, wrote to Murdoch to say that although he had been unaware of alleged misconduct when he was executive chairman of News International, which operated the now-defunct News of the World, he had to take responsibility.

Murdoch: The man behind the empire
RELATED TOPICS

"The pain caused to innocent people is unimaginable," he said in a letter provided by Dow Jones.

British Prime Minister David Cameron has been among those publicly decrying the hacking, blasting Murdoch's company Wednesday as he launched a high-powered judge-led investigation into the nation's press.

Coulson resigned as News of the World editor in 2007, after his former royal editor and a private detective were convicted of conspiracy to hack into royals' voice mails. But while offering his resignation, he insisted he had been unaware of the crimes and he was not charged at the time.

Coulson resigned as Cameron's spokesman in January when the scandal blew up afresh.

Earlier this month, Coulson was arrested in connection with claims of phone hacking and corruption dating to his days as the News of the World editor.

Meanwhile, the FBI is also investigating News Corp. after a report that employees or associates may have tried to hack into phone conversations and voice mail of September 11 survivors, victims and their families.