By Robin Oakley, Special to CNN 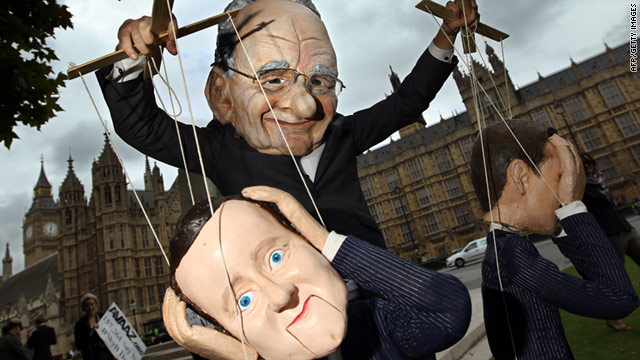 A demonstrator in a Rupert Murdoch mask controls a puppet of PM David Cameron in a protest outside the Houses of Parliament.
STORY HIGHLIGHTS

Will British politicians now finally start saying what they believe, not what they hope will please the Murdoch editors whose powers they have so patently feared until now?

It will be months, perhaps years, before we can total up the fallout from the scandal engulfing the Murdoch media empire, following allegations about the News of the World's hacking into the cell phones of child murder victims and corrupt payments to police for information. But the effects on politics and the media will be profound.

Take the simplest issue first. As leader of the Conservative Party and then prime minister, David Cameron appointed as his head of communications Andy Coulson, the former editor of the News of the World who had resigned after that newspaper's royal correspondent was jailed for plotting with a private investigator to hack into the phones of members of the royal family.

Cameron did so despite specific warnings from the media and from senior politicians that Coulson, who had denied any knowledge of the phone-hacking under his editorship, came with undisclosed baggage and could not be believed.

Coulson, who resigned from Downing Street before the latest storm blew up, has been arrested over the allegations of illegal phone hacking and illicit payments to police officers, and Cameron now says it was a mistake to have given him a second chance but that he "remains a friend."

The psychology of Coulson's appointment, say Conservative insiders, was that Cameron, a product of Britain's poshest private school, wanted a streetwise ex-tabloid journalist in his media hot seat to help him rebrand his party and strike the right tone in coping with the demands of the modern media world. But the appointment has imploded.

The credibility, moral standards and judgment of Britain's prime minister are all being seriously questioned, all the more so because he enjoys a chummy social relationship with Rebekah Brooks, Murdoch's chief executive. Or at least he he did ... Cameron now says that if it was true that Rebekah Brooks had offered her resignation, he would have accepted it.

Cameron, previously adept at swift political footwork, has looked slow and reluctant over the political decisions involved in Murdoch's BSkyB bid and in the calling of sufficiently rigorous public inquiries into the phone-hacking scandal and police corruption. He has been forced onto the back foot.

The closing of the News of the World could be a political turning point -- the moment at which the electorate began to lose faith in Cameron, not least because Ed Miliband, who has been having a shaky period as the new leader of the opposition Labour Party, has been far more forthright in his condemnation of the Murdoch newspaper's behavior.

The public did not seem too bothered about the hacking of phones belonging to actresses and well-paid sports stars, but they have been genuinely outraged by revelations that the phones of child murder and terrorist victims suffered the same treatment.

To the approval of many commentators, Labour leader Miliband demanded that in consequence the coalition government led by Cameron reverse its previous readiness to sanction the takeover by Murdoch's News Corporation of the 61 per cent of the broadcaster BSkyB that he does not already own.

It was Murdoch's desperation not to lose that deal which led him to shut down the News of the World, with the loss of 200 jobs, despite its position as the market leader with 2.6 million sales every Sunday.

It was, said its journalists, literally "hacked to death." Miliband's success in blocking the takeover -- he called for it to be referred to the Competition Commission -- means he has achieved a formidable scalp and won new respect in the political world.

Labour's leader had better be sure, however, that there is not so much as a little toe bone lurking in his own political cupboard. Labour lawmakers are anticipating that those who stay working for any re-shaped Murdoch empire will have revenge in mind and will not be gentle in their digging.

The sorry state of British politics is revealed by the fact that until very recently even Miliband has sought to keep on the right side of Murdoch. Although Westminster was already buzzing about the phone hacking scandal, both Miliband and Cameron turned up at Murdoch's News International summer party in June and chatted to him there.

It was yet another demonstration of the extraordinary power wielded in British politics through recent decades by the ex-Australian media tycoon.

Politicians have sought his favor because he owns mass circulation newspapers like the Sun and the News of the World and they reckoned he controlled a vital section of public opinion. Some did so too because they feared that the diary columnists of his papers might be turned loose on their personal peccadilloes if they did not toe the Murdoch line.

But despite his strong political views, Murdoch has essentially been about backing winners in the interests of his businesses.

The views he shared with Margaret Thatcher on Europe and on the unions made him a ready ally for the Conservative leader throughout her years in power and a bitter opponent of former Labour leader Neil Kinnock. Remember the character assassination of the opposition party leader in 1992 when the election day issue of the Sun declared across its front page: "If Kinnock wins today will the last person to leave Britain please turn out the lights?"

But when Murdoch sensed in the mid-'90s that Britain was ready to turn to New Labour he instructed the Sun to switch sides, though not before Tony Blair had been made to demonstrate his subservience by flying all the way to Australia in 1995 to address a meeting of News International executives.

In an echo of that Cameron too was criticized in 2008 for accepting free flights to go and talk to Murdoch on his luxury yacht in the Mediterranean.

Blair, who was known to intervene with other prime ministers and European officials on Murdoch's behalf, was able to count on the Sun and the Times almost to the end of his term in power. His famous speech attacking the "feral beasts" of the media did not come until just before he quit -- and even then he chose to name another paper rather than mention any Murdoch tabloid.

Blair's successor Gordon Brown worked on trying to keep Murdoch's approval, and his wife Sarah got on well with Rebekah Brooks. But that was not enough to save Gordon Brown when Murdoch decided from the opinion poll evidence in 2009 that Cameron was going to be the next election winner.

Deliberately, he wrecked Brown's leader's speech at the Labour Party Conference by having the Sun announce the switch the same day.

So former Brown aide Ed Miliband's decision to cut Labour free from the Murdoch empire is a risky one politically, but it could also be a sign that new generation politicians are beginning to believe Murdoch's powers are on the wane.

The guest list at future News International parties will be scrutinized with the care that Sovietologists used to devote to the podium line-up in Red Square as the military goose-stepped past.