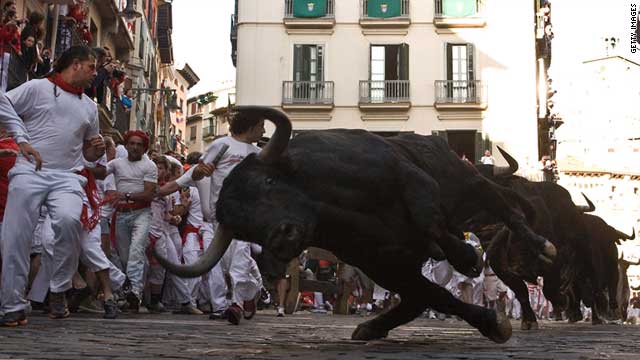 The annual running of the bulls in Pamplona, Spain, started 400 years ago.
STORY HIGHLIGHTS
RELATED TOPICS

Madrid (CNN) -- A 24-year-old Australian man was gored in the thigh Friday, the second day of the annual running of the bulls in Pamplona, Spain.

At least three other runners went to hospital with injuries, officials said.

The Australian man was gored in the bullring at the end of the course. One bull became separated from the pack and came last, and alone, to the bull ring.

Television images showed the man coming up behind the lone bull, which then turned on the man, who suddenly slipped and fell to the ground. He was then gored in the thigh.

He was immediately tended to the bullring medical staff. A hospital report on all the injured is due later.

Four runners went to the hospital with injuries Thursday on the first day of the running of the bulls.

Commentators on Spanish state television TVE considered it a relatively safe start to the dangerous annual tradition in Pamplona, which has tallied thousands of injuries and 15 deaths since record-keeping began in 1924, including the fatal goring of a Spanish man in 2009.

The run in Pamplona started 400 years ago and became popular worldwide after author Ernest Hemingway wrote about it in the 1920s in his book "The Sun Also Rises," also published under the title "Fiesta."

It is now broadcast live across Spain by state television TVE, which pays Pamplona for exclusive rights, and positions some 20 cameras along the course.

The daily run continues for eight days, through July 14, at 8 a.m. (2 a.m. ET). It is the highlight of the San Fermin festival in Pamplona that attracts hundreds of thousands to the nonstop fiesta.