British scandal sheet wracked by scandal of its own 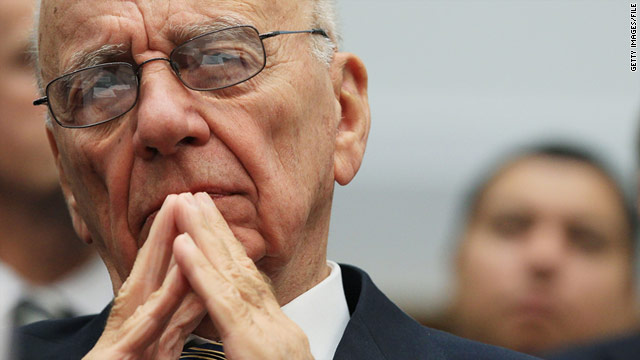 Experts say heads are likely to roll over the hacking scandal -- but Rupert Murdoch insists he is standing by Rebekah Brooks.
STORY HIGHLIGHTS

(CNN) -- Britain's News of the World newspaper and its parent company News International will likely be seriously damaged by the phone-hacking scandal, analysts say.

Experts are divided, though, on how the paper's owner, media magnate Rupert Murdoch, will weather the storm.

Journalists at News of the World, a tabloid that is the world's top-selling English-language newspaper, have been accused of hacking into the mobile phone account of missing British teenager Milly Dowler, intercepting messages in search of news.

They then allegedly deleted messages to keep her mailbox from filling up, giving her family and friends false hope that the schoolgirl -- later found murdered -- was still alive.

Police also are investigating suggestions the paper -- known for its exposes of celebrities and politicians -- may have targeted the relatives of other high profile crime victims, including at least one of those killed in the 2005 London bombings.

The controversy has sparked a "wave of revulsion" towards the weekly, prompting calls for a boycott by both readers and advertisers which look set to hit it this Sunday.

Hollywood star Hugh Grant, who says his own phone was hacked by News of the World, is among those encouraging Britons to "vote with their wallets."

And several experts have warned that even firing the reporters and editors responsible is unlikely to repair the paper's wrecked reputation.

Murdoch has condemned the allegations against News of the World as "deplorable and unacceptable," and said, "We are committed to addressing these issues fully and have taken a number of important steps to prevent them from happening again."

But Murdoch insists he is standing by Rebekah Brooks, editor of News of the World at the time and now News International chief executive.

In a memo to the newspaper's staff, Brooks said, "it is inconceivable that I knew or worse, sanctioned these appalling allegations."

But Murdoch biographer Michael Wolff believes Brooks, whose relationship with Murdoch has often been compared to that of a daughter, is among the high profile heads likely to have to roll.

"Rebekah is toast," he told CNN. "It wouldn't be the first time that Rupert has thrown a family member overboard."

Even that, Wolff says, is unlikely to be enough to repair the damage.

"Instead they covered it up, and once a cover-up has started, I'm not sure you can back out of it. It may be that the only way to fix it now is to purge the company of people called Murdoch."

It's a rare thing for a brand to be the focus of such a wave of revulsion
--Simon Middleton, brand strategist
RELATED TOPICS

Business strategist Simon Middleton, author of "Build a Brand in 30 Days," agrees that the company has gone well beyond the point of instituting basic damage limitation measures.

"It's a rare thing for a brand to be the focus of such a wave of revulsion around the country," he told CNN, predicting a "perfect storm" of trouble for the paper following the recent "skin-crawling" revelations.

"Firing somebody isn't going to fix this. It will take years," he said.

Middleton said the impact of the phone-hacking scandal could spread far beyond the News of the World -- and that the paper itself may not survive.

"It's like a family: If one member gets a bad reputation, the others can be tarnished too -- you get damage by association, and that could be the case for the other papers in News International stable.

But media analyst Claire Enders said the scandal was unlikely to affect Murdoch's business on a global level. "News International is still immensely powerful. The story is not making much impact outside the UK."

Middleton said that - like an alcoholic recognizing he has a drink problem -- the paper's only hope was to acknowledge its faults and say it's sorry - before rebuilding from scratch.

"Brands that have made big mistakes have been forgiven in the past, but only after they recognized that they got it wrong, and apologized," he said.