Hacking scandal: Who is Rebekah Brooks? 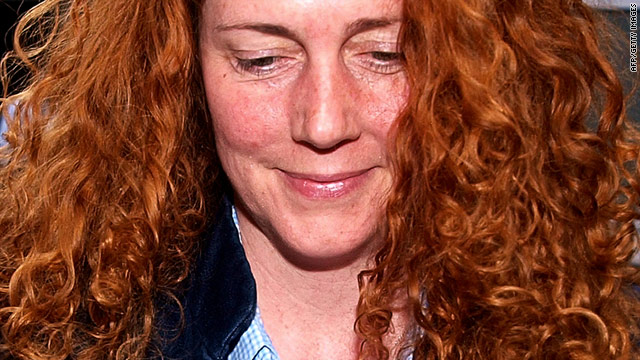 Rebekah Brooks, ex-editor for News of the World, quit as News International chief executive over the hacking scandal.
STORY HIGHLIGHTS

London (CNN) -- Rebekah Brooks, who resigned on Friday as chief executive of News International, was the youngest person ever to edit a national British newspaper, and made a stellar rise through the ranks of Rupert Murdoch's media empire.

But following sweeping allegations of illegal eavesdropping by News of the World journalists when she was editor, British lawmakers asked her to testify before a parliamentary committee investigating the scandal.

She has agreed to appear on July 19, alongside former boss Rupert Murdoch and his son James.

However, following her arrest by police investigating the hacking scandal on Sunday, it is unclear if she will answer MPs' questions.

Brought up in Cheshire, northern England, in the 1970s, Rebekah Brooks is said to have decided on a career in journalism at the age of 14, beginning with a job as a "tea girl" at her local paper.

In her late teens, she moved to Paris, where she is reported to have worked at architectural magazine L'Architecture d'aujourd'hui and studied at the Sorbonne.

On her return to the UK, she worked in regional papers before making the move to Sunday tabloid News of the World in the late 1980s.

Starting out as a secretary, Rebekah Wade -- her maiden name -- swiftly made her way up the editorial food chain, becoming deputy editor by the age of 27.

She tells of how, at a corporate golf day shortly after she was appointed, one senior executive ordered her to sew the buttons back on his shirt.

Sexism in the workplace aside, Brooks' rise through the ranks continued. She was named deputy editor of the hugely popular Sun newspaper, the News of the World's sister title, in 1998.

In 2000, she returned to the News of the World, this time in the top job, becoming the youngest-ever editor of a national British paper.

While editor of the weekly, Brooks argued for the creation of a U.S.-style "Sarah's Law," which would allow parents with young children to know about anyone convicted of child sex crimes living close to their homes.

As part of the controversial campaign, which was inspired by the murder of eight-year-old Sarah Payne in July 2000, Brooks took the decision to name and shame offenders in the pages of her paper.

The lists sparked witch-hunts and riots, as communities across Britain tried to hound pedophiles out of their neighborhoods. It was condemned by police, but Brooks remains unrepentant.

In a 2009 speech, she admitted the campaign was "a blunt and contentious way of informing the public... hard lessons were learnt but I don't regret the campaign for one minute."

Inside the Murdoch scandal
RELATED TOPICS

In 2003, she was promoted again, becoming editor of the Sun.

In addition to working for two of the UK's most famous tabloids, Brooks hit the headlines herself on a number of occasions.

In March 2003 she courted controversy -- and hinted at the scandal to come -- when, appearing before a government committee, she admitted that her paper had paid police officers for information.

Two years later, in November 2005, she was arrested after an alleged assault on her then-husband, Kemp. No charges were ever filed against her. The couple divorced in 2009.

Brooks held the Sun post until 2009 when she was handpicked for the role of News International chief executive by Rupert Murdoch.

The pair had been close for many years: Murdoch is said to treat Brooks like a daughter.