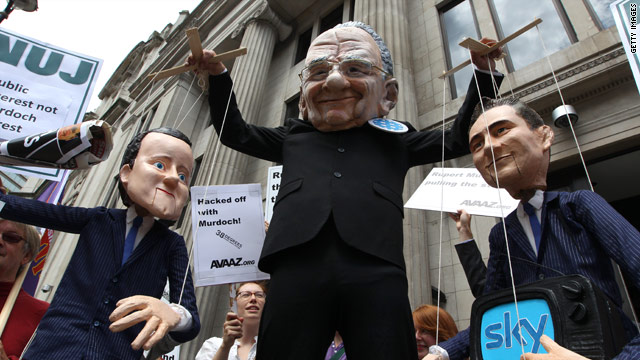 The head of News Corp. issued the statement after the father of a bombing victim said his phone may have been hacked. allegations that Prime Minister David Cameron called "absolutely disgusting."

Graham Foulkes, whose son was killed in a 2005 London terrorist attack, said Wednesday his phone number and home address were found in the files of a private investigator working for the News of the World, a Sunday tabloid.

The accusation came after allegations that journalists also hacked into the phone messages of missing teenager Milly Dowler, who was later found to have been murdered.

Police launched a special investigation this year into accusations that News of the World engaged in widespread phone hacking targeting politicians and celebrities. Actor Hugh Grant told CNN Wednesday that police had visited him as part of their investigation.

Hugh Grant on UK tabloid scandal: 'Vote with your wallets'

Now, following allegations this week that the paper also illegally eavesdropped on murder victims and the families of people killed in terrorist bombings, Cameron said an independent inquiry was needed.

Gallery: Who is who in UK phonehacking scandal

"We are no longer talking about politicians and celebrities but murder victims, potentially terrorist victims. It's absolutely disgusting what has taken place," Cameron said in the House of Commons. "I think everyone in this house and country will be revolted by what they've heard and seen on their TV screens."

News Corp. subsidiary News International, which owns News of the World, said it welcomed "calls for a broad public inquiry into standards and practices in the industry."

The list of possible victims widened further Wednesday, when the British Press Association reported that relatives of soldiers killed in Iraq and Afghanistan may have been victims of the hacking scheme.

"The Ministry of Defence was seeking clarification from Scotland Yard as sources said families of dead servicemen were being contacted by detectives over the scandal," the report said.

A spokesman for the Ministry of Defense told CNN: "This is a matter for the Metropolitan Police who are investigating these allegations. It would be inappropriate for us to comment whilst this investigation is ongoing."

The British Press Association said News International had told it that it would be "absolutely appalled and horrified" if the allegations proved true.

Separately, London's Metropolitan Police said Wednesday they were opening an investigation into the possible bribery of police officers by people working for the News International media group.

Papers given to the Metropolitan Police by News International lawyers "include information relating to alleged inappropriate payments to a small number of... officers," Commissioner Paul Stephenson said in a statement Wednesday.

News International confirmed it had given police paperwork related to the possible bribery, calling the handover evidence of its "determination as a company to deal responsibly and correctly with the issues."

The company also said Wednesday it was "shocked and appalled at any serious allegations with regards to victims of crime."

"Our company must fully and proactively cooperate with the police in all investigations, and that is exactly what News International has been doing and will continue to do under (CEO) Rebekah Brooks' leadership," Murdoch said in his separate statement.

A senior police officer involved in the phone hacking investigation called Graham Foulkes Tuesday to say his details were in the files of a private investigator working for the News of the World, the victim's father said Wednesday.

Foulkes' son David was among the 52 people killed on July 7, 2005, when suicide bombers struck three London Underground trains and a bus.

Foulkes said police did not tell him whether his phone had been hacked, but the possibility horrified him, he said. London's Metropolitan Police refused to comment Wednesday.

"We'd obviously been having very intimate and detailed personal conversations, so to think now that these people may have been listening in to that at such an important time, such a dark and difficult time, is quite unbelievable," Foulkes said.

He and his wife had just been talking about "how horrendous it must have been" for the Dowler family "to be told that someone had been listening in to them," when he learned that he, too, might have been a victim of hacking, he told CNN affiliate ITV.

If the allegations of hacking are true, he said, the perpetrators "need to be punished, and punished severely."

He called on News International to be truthful and honest about what happened and "put their hands up and say, 'We're sorry.'"

Labour Party leader Ed Miliband said Brooks should resign in the face of what he called "the biggest press scandal in modern times."

Cameron refused to back Miliband's call, saying it would be fairer to let the investigation run its course.

Murdoch's statement suggests he is standing by Brooks.

Initial complaints about hacking came from politicians and celebrities, but the story took a new turn Tuesday with the accusation that the paper hacked into the voice mails of the murdered girl.

"The family are completely horrified. They thought this was all over" after the disappearance of Milly Dowler in 2002 and the conviction of a man for her murder this year, Dowler family lawyer Mark Lewis said Tuesday.

Journalists deleted some of Milly Dowler's messages to make space for more, thus giving her parents hope she was still alive when she was dead, Lewis said.

But the Dowler case marks the first time the newspaper is accused of interfering with a police investigation.

Police have declined to say whether Milly Dowler was among the victims of phone hacking.

Brooks told staff Tuesday that it was "almost too horrific to believe that a professional journalist or even a freelance inquiry agent working on behalf of a member of the News of the World staff could behave in this way."

Brooks, who was editor of the paper at the time of the alleged Dowler hacking, told staff she was "sickened that these events are alleged to have happened."

Police launched the new investigation this year in response to widespread complaints from politicians, celebrities and other high-profile figures who fear they may have been targets.

News International has apologized for unspecified cases of hacking. They say they have been cooperating with police since the new investigation was launched in January.

The tabloid in April offered compensation and "apologized unreservedly" for the "unacceptable" acts. It did not name the victims.