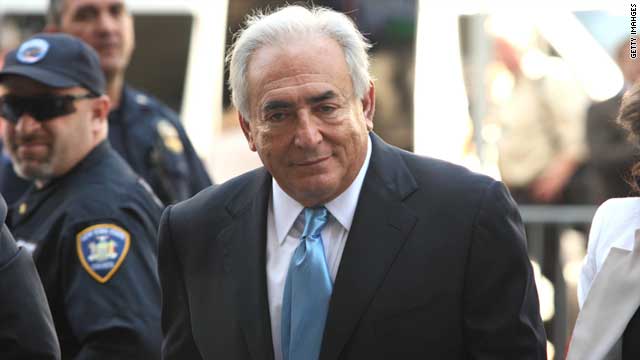 (CNN) -- France awoke Friday to the unexpected news that the case against French politician Dominique Strauss-Kahn -- accused of sexually assaulting a hotel maid in New York -- appeared to be crumbling.

Strauss-Kahn was released on his own recognizance and freed from house arrest Friday morning after "serious issues" were raised about the credibility of his accuser.

Broadcaster TF1, Le Figaro newspaper and others ran moment-by-moment accounts of the court proceedings on their websites, with headlines proclaiming that Strauss-Kahn was freed -- but was still accused.

On its website, Paris Match, asking whether Strauss-Kahn might now be exonerated, compared the latest developments to the kind of dramatic turn of events beloved of Hollywood.

And some in France have begun to feel vindicated over concerns they felt about Strauss-Kahn's treatment by perhaps over-zealous prosecutors in New York, CNN's Jim Bittermann in Paris reported.

Many were shocked by widely broadcast footage of Strauss-Kahn in handcuffs in May, since a French law passed in 2000 prohibits the publication of images of suspects in handcuffs or in court in order to protect defendants' presumption of innocence.

Others questioned whether there had been a rush to judge. "There's a general feeling of a media, a judicial fury -- of a lynching," Jack Lang, France's former minister of culture and education, told Europe 1 radio at the time.

Interviewed on CNN Friday, Lang said he was very happy about the latest developments -- and hoped to see his fellow Socialist party politician make a comeback.

The very public fall from grace of Strauss-Kahn, who was forced to step down as head of the International Monetary Fund, prompted widespread questioning in France over attitudes to women.

And it threw his Socialist Party colleagues into disarray, as they faced the disappearance from the scene of the man widely perceived as a frontrunner in France's presidential election next year. A party primary is due in October.

Socialist Party leader Martine Aubry -- who said many colleagues were shocked by Strauss-Kahn's treatment at the time of his arraignment -- was quoted in L'Express news magazine as expressing "immense joy" at Thursday night's news, first reported in the New York Times.

Speaking from Lille, she said: "I sincerely hope that the U.S. court will establish the truth tonight and will let Dominique leave this nightmare."

Socialist Party member Jean-Marie Le Guen, seen as a Strauss-Kahn ally, told French radio station France Info: "The fact that these terrible accusations are crumbling prove that all those people who speculated on his disappearance from the political scene will now have to count on one person.

"I hope he will soon be able to walk free."

Lionel Jospin, a former Socialist prime minister seen as close to Strauss-Kahn, described the report as a "thunder clap" in an interview with RTL, but said it was too early to bid on a political comeback for him.

The question of where this leaves the Socialist Party, only three days after its presidential primary opened -- and with nearly two weeks to go before registration closes -- dominates many French media outlets.

In an online piece topped by images of Aubry, Francois Hollande and Segolene Royal -- who are among five candidates to have registered so far -- TF1's headline asks: "How will they react to the DSK thunderbolt?"

The candidates have limited themselves to the human dimension of the potential turnaround in Strauss-Kahn's fortunes, not the political, the piece remarks, while party spokesman Benoit Hamon has dismissed suggestions the primary might be delayed.

Jean-Louis Borloo, himself a potential presidential candidate in 2012, is cited by Le Monde newspaper as saying he believes Strauss-Kahn could seek a return to political life.

"If things go as one would imagine and the charges are withdrawn... what would prevent him coming back if he has the desire and energy to?" he is quoted as saying.

But reactions from people on the streets of Paris suggest that even if all the charges against Strauss-Kahn were to be dropped, he could struggle to re-enter political life.

"I think he really is out of the (race for the) presidency, because anyway this story will have an impact on his career and his popularity, so I don't think he will be able to make it," said Clement, 23.

Deborah, 20, said she believed "the political party is over" for Strauss-Kahn. And Saad, 23, said: "There will always be a doubt (in people's minds), so even if they say 'yes, he is innocent', there will always be people who will believe the contrary."

Among Paris's chattering classes, few doubt that Strauss-Kahn would be keen to get back into politics if he can, CNN's Bittermann says, but they too are unsure whether he would ever be able to restore his tarnished image.