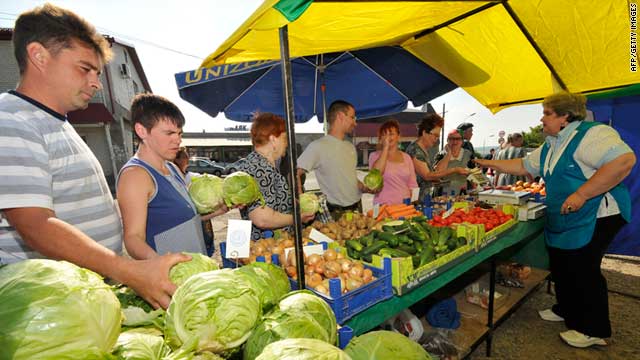 Moscow (CNN) -- Russia has lifted a ban on some fresh vegetable imports from the European Union as of Tuesday, a senior official said.

Gennady Onishchenko, head of Russia's state consumer protection watchdog, said vegetables from Belgium and the Netherlands are now allowed into the country.

Moscow banned imports of fresh vegetables from the European Union earlier this month following an outbreak of E. coli in Germany that is blamed for 47 deaths.

French health officials said Monday the same strain of E. coli appeared to have resurfaced in an outbreak in the Bordeaux area that has left nine people in need of hospital treatment.

Onishchenko told Russian news agencies that Belgium and the Netherlands were the first to have the vegetable import ban lifted because they have reliable laboratories and because no one there has been affected by the recent cases of E. coli.

The Netherlands is Russia's biggest supplier of fresh vegetables, providing one-third of such imports in monetary terms, he is quoted as saying.

The two countries will have to provide certificates for their exports, stating their origin and that they are safe, he said.

Poland, Lithuania, Spain, Denmark and the Czech Republic are on a "waiting list" and may be allowed access to the Russian market again if certain conditions are met, Onishchenko added.

European Union nations exported about 600 million euros worth of vegetables to Russia last year, according to the European Commission.

Both the French and German outbreaks have been linked to sprouted salad seeds.

An investigation in Bordeaux suggested the seeds concerned were supplied by a British company, but no definitive link has been established, an official with France's economy ministry said.

The European Center for Disease Prevention and Control said on Monday the number of deaths in the outbreak centered in Germany had risen to 47, including one death in Sweden.