Amanda Knox: 'I don't know what happened that night' 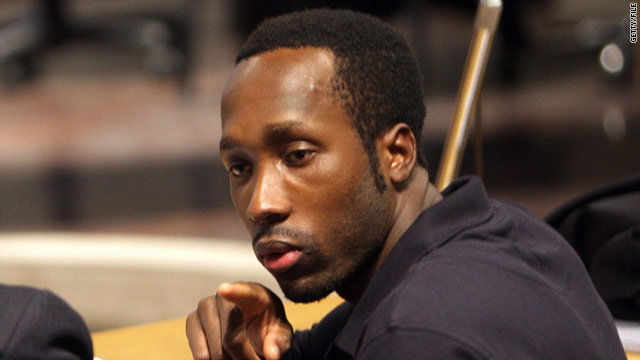 Rudy Guede, pictured in 2009, refused to testify Monday that Amanda Knox was not involved in the death of her roommate.
STORY HIGHLIGHTS

Perugia, Italy (CNN) -- Amanda Knox, the American student convicted of killing her British roommate Meredith Kercher in Italy, faced a surprise accusation Monday from another man behind bars for the murder.

Rudy Guede refused to say Knox was not involved -- and prosecutor Giuliano Mignini read out a letter saying Guede thought the American and her then-boyfriend had killed Kercher.

Guede wrote to a news website in the spring of 2010, after the three were convicted, referring to "a horrible homicide of a splendid young girl, Meredith Kercher, by Amanda Knox and Raffaele Sollecito."

Mignini produced a copy of the letter on Monday during Knox's appeal against her conviction. Defense lawyers said they did not know of the existence of the letter before Mignini read it in court.

Knox took the stand for emotional testimony after Guede spoke, saying she was "shocked."

"The only time that Rudy Guede, Raffaele Sollecito and I were in one room together was in a court room.... He knows what the truth is. I don't know what happened that night," she said.

Monday's appeal hearing was the first time the three people convicted of the crime appeared in court together since a preliminary hearing years ago.

Kercher was found stabbed to death in 2007 at the house she shared with Knox in Perugia, the central Italian town where both were students. She was semi-naked and her throat had been slashed.

Knox, 23, and her then-boyfriend Sollecito, 27, were convicted of the murder in 2009. Guede was found guilty in a separate fast-track trial and sentenced to 16 years.

Defense lawyer Carlo della Vedova and Knox's mother Edda Mellas both rejected Guede's testimony Monday. Her father Curt Knox, speaking to CNN from Seattle, said it was "very disappointing that he will not own up to his responsibility."

Under cross-examination, Guede said he had written what he always believed, but that it "was not up to me to say who was the killer."

Della Vedova said Guede's letter was based on "a feeling" and that his accusations are not based on facts or events he witnessed.

"He didn't say much. He refused to answer most of the important things," she said. "Amanda wanted to be able to confront him and she was denied that."

Mellas said she had suffered watching her daughter testify: "It's devastating to watch your child in pain. It's horrible to see her go through that."

She said before the hearing she cannot understand why Guede might spend only seven years behind bars if he is released early for good conduct, while Knox could serve 26 years.

Sollecito said Monday he and Knox had been behind bars for nearly four years, their lives destroyed based only on suppositions.

Francesco Maresca, the lawyer for the Kercher family, said Guede's testimony was the first time he has said "clearly that the two defendants were present in the scene of the crime that night."

The hearing is now adjourned until July 25, with further hearings on July 30 and August 1.

The appeal hearing has heard a confusing array of stories from a range of convicted criminals this month.

Guede had been called as a witness to corroborate the story of another convict who told the court just over a week ago that Guede had said Knox and Sollecito were not involved.

But on the stand, he did not back Mario Alessi's version of events.

As part of the appeal, forensic experts are retesting evidence that was used to convict Knox.

That evidence includes a knife found in Sollecito's apartment with Knox's DNA on the handle and what Perugia prosecutors say is Kercher's DNA in a tiny groove on the blade.

The prosecution contends that the knife was used to stab Kercher in the neck and that it had been cleaned. The DNA matter attributed to Kercher consists of flesh, not blood, they say.

The sample, however, was so small that forensic scientists investigating Kercher's murder were not able to double-test it in accordance with international forensic science norms, which Knox's legal team says raises doubts about its validity.

The second piece of evidence the forensic experts are testing is the tiny metal clasp from Kercher's bra, which was cut from her body after her slaying.

An independent forensics study on the DNA evidence is due Thursday, Curt Knox said Monday.

"We're hopefully going to hear good news that it's incompatibale to Amanda and not useful," Knox said.

Forensic scientists in the investigatory phase determined that Sollecito's DNA is present on the metal clasp.

The clasp was identified on an investigatory video the same day Kercher's body was found. But it was not collected until nearly six weeks later, giving the defense cause to question whether the sample may have been contaminated.

CNN's Hada Messia and Dan Rivers contributed to this report.