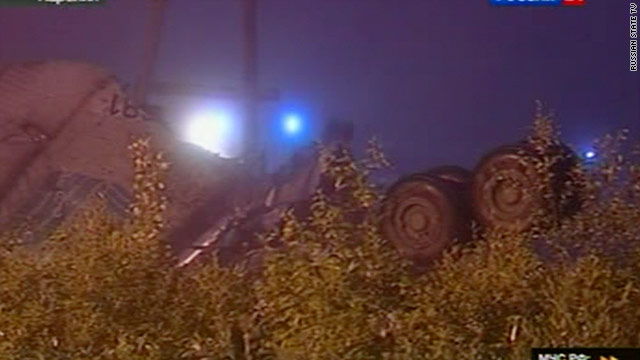 The wreckage of a crashed Russian jetliner outside of Petrozavodsk.
STORY HIGHLIGHTS
RELATED TOPICS

Moscow (CNN) -- At least 44 people died when a Russian jetliner crashed onto a highway outside the northwestern city of Petrozavodsk late Monday, emergency management officials said.

Russia's Emergency Situations Ministry said the jet had 43 passengers and a crew of nine aboard when it took off Monday night from Moscow for Petrozavodsk, about 950 kilometers (600 miles) to the north. Ministry spokeswoman Irina Andrianova said the survivors, including one child, were taken to hospitals.

Controllers lost contact with the twin-engine Tupolev-134 at about 11:40 p.m. (3:40 p.m. ET), and it crashed onto a highway outside Besovets, near the Petrozavodsk airport, the ministry reported.

Andrianova said the jet broke into several pieces and caught fire after the crash. Nearly 140 rescue workers, doctors and police officers were on the scene before dawn Tuesday, and the ministry was sending an aircraft with more rescuers and medical teams from Moscow, she said.