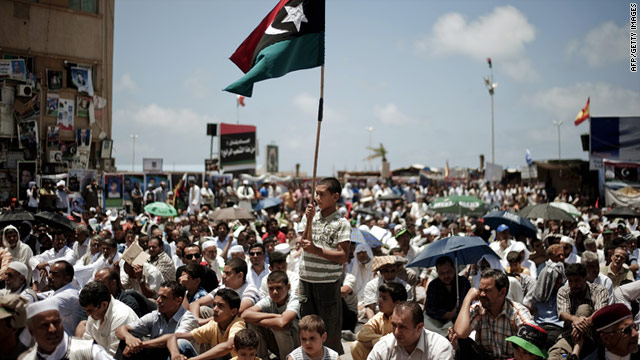 A boy holds up the former Libyan monarchy flag-- the sign of the Libyan revolution-- in the rebel stronghold of Benghazi, Libya.
STORY HIGHLIGHTS

Madrid (CNN) -- Spain is expelling the Libyan ambassador to Madrid and three other Libyan diplomats here, the Spanish Foreign Ministry said in a statement Thursday.

"The government of Spain has decided to put an end to the mission of the ambassador accredited in Madrid by the authorities in Tripoli (Libya), because the Gadhafi regime has lost all legitimacy due to its continual repression of the Libyan population," the statement said.

The government also is expelling three other diplomats at the Libyan embassy "who undertook activities incompatible with their diplomatic status," the statement said.

But Spain has not broken diplomatic relations with Libya, said a Foreign Ministry spokeswoman, who by custom is not identified.

Spain still has an embassy in Tripoli, although it evacuated its personnel from the city, like many other nations, as fighting between the regime of Moammar Gadhafi and rebels intensified in late March.

The Spanish Embassy in Tripoli, staffed only by local Libyan personnel, "is not closed in a diplomatic sense," the spokeswoman said.

It was not immediately clear, she added, how many Libyan diplomats or local Spanish personnel might remain at the Libyan Embassy in Madrid, after the expulsion of the ambassador and the three other Libyan diplomats.

Spanish Foreign Ministry Trinidad Jimenez on June 8 visited the Libyan rebel stronghold of Benghazi , where she declared that Libya's rebel National Transitional Council was a "valid interlocutor" and a "legitimate representative of the aspirations of the Libyan people," the spokeswoman said.

Spain has been participating in United Nations-mandated, NATO-led military operations in Libya. Spain has deployed four F-18 fighter jets and a refueling plane to help enforce a no-fly zone, and a frigate, a submarine and a surveillance plane to help impose an arms embargo against the Gadhafi regime.