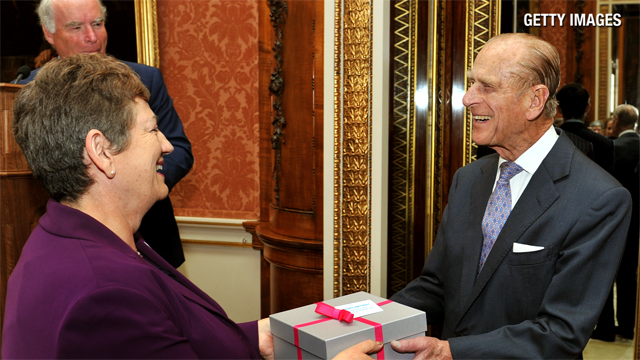 London (CNN) -- Prince Philip, the husband of Britain's Queen Elizabeth, turned 90 on Friday and marked the milestone with just another working day, according to Buckingham Palace officials.

Philip, also known as the Duke of Edinburgh, will continue with his numerous public and private engagements, although he will gradually "wind down" his workload, a Buckingham Palace spokesman said.

"I reckon I've done my bit, I want to enjoy myself now... have less responsibility, less frantic rushing about, less preparation, less trying to think of something to say," Philip said in an interview with the BBC.

"Plus my memory is going, I just can't remember names, I'm just sort of winding down," Philip added.

Gun salutes in London and Edinburgh, Scotland, celebrated the occasion and on Friday Philip hosted an event for the Royal National Institute for Deaf People, which is marking its centenary.

The queen marked the birthday by making Philip the titular, or nominal, head of the Royal Navy by conferring on him the title Lord High Admiral of the Navy, previously held by her. Philip gave up his naval career to devote his life to royal duty.

The official British Monarchy website said: "Since the queen's accession, His Royal Highness has played a prominent part in many aspects of national life."

The official celebration will be on Sunday with a service at Saint George's Chapel in Windsor Castle, southern England, attended by the royal family.

Philip accompanies the queen on all her Commonwealth tours and state visits overseas and has made over 5,000 public speeches during his working life according to Buckingham Palace, the queen's official residence.

However, he is an outspoken and controversial figure in the UK.

Many like his no-nonsense approach to life and applaud his charitable work -- he is patron of about 800 organizations -- but some find many of his views and public comments racially and culturally offensive.

In 1995 he asked a Scottish driving instructor in Oban: "How do you keep the natives off the booze long enough to pass the test?"

And on another trip to Australia in 2002 he asked a group of Aborigines: "Do you still throw spears at each other?"

In 1986 when asked what he thought about Beijing during a tour of China, he said: "Ghastly. On the same trip he warned a group of British students: "If you stay here much longer, you'll all be slitty-eyed."