By Dominique van Heerden, for CNN 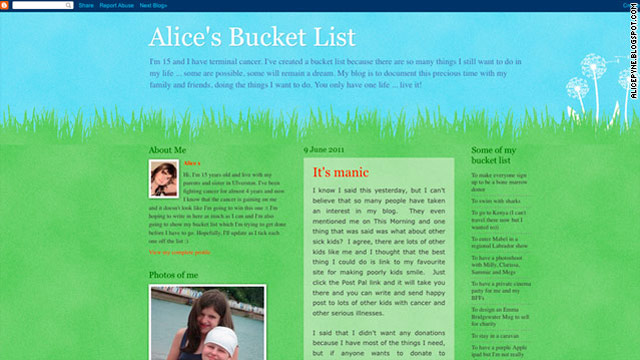 (CNN) -- A terminally-ill British teenager has become an online hit after posting a wish list of things she would like to do before she dies on her personal blog.

Alice Pyne, 15, has been battling a deadly form of cancer for the last four years, and recently got news that her cancer is spreading throughout her body.

"I know that the cancer is gaining on me and it doesn't look like I'm going to win this one," she writes.

Alice started her blog a few days ago as a way to keep her friends and family updated on her progress, and thought it would be "fun" to write a so-called 'bucket list'.

"Mum always tells me that life is what we make of it and so I'm going to make the best of what I have and because there were so many things I still wanted to do, mum suggested that I turn my ideas into a bucket list."

One of her biggest wishes is that "everyone sign up to be a bone marrow donor", and this hope, along with Pyne's name, was mentioned in the British parliament on Wednesday.

Alice's 'bucket list' has since become one of the most popular topics online with people from all around the world, including pop star Katy Perry, tweeting the hashtag #alicesbucketlist.

"Oh dear and I thought that I was just doing a little blog for a few friends!" Alice recently wrote.

"Thank you so much for all your lovely messages to me. I don't sleep very well and I sat up all night reading them as they came in from all over the planet, every single one, and they have made me smile so much so that is a good thing."

Thousands of people have left messages of support on Alice's blog and many have even offered to help her tick off some of the items on her list.

Swimming with sharks, having her hair done "if they can do anything with it", and entering her dog, Mabel, in a regional Labrador show are among the things she still wants to do.

She also said she would like to meet the members of British pop group Take That, a wish that may just come true. "I'm off to see Take That this weekend, can you believe it?" an updated blog post read.

Although she has "most of her wish list fulfilled", Alice is adamant that she's not looking for donations. She's simply happy to have raised awareness, and hopes others will use her story to do the same.

"I'm excited about the things I am going to be doing, but the biggest thing has to be all the people who are joining bone marrow donation schemes because of me."