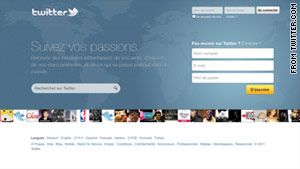 French programs can no longer urge viewers or listeners to follow them on specific sites, such as Twitter.
STORY HIGHLIGHTS
RELATED TOPICS

Paris (CNN) -- A decree from the early 1990s, reimplemented by French regulators, is putting an end to French television and radio announcers naming social networking sites on air except for news purposes.

The decree banned "clandestine advertising": the promotion of a brand outside the boundaries of recognized publicity avenues.

The reimplementation of the ruling by France's Superior Audiovisual Council means that French programs will no longer be able to urge their viewers or listeners to follow them on specific sites, such as Twitter, as has become the norm in worldwide broadcasting.

The controversy began when an unnamed French TV channel approached the council to ask whether, under this decree, they had the right to direct viewers to social sites.

Christine Kelly, spokeswoman for the council explained: "Facebook and Twitter are commercial brands like Coca-Cola or L'Oreal or any other. There are many social networking sites on many topics -- cooking, animals -- why should we mention one and not others?"

From now on news anchors will be able to give only vague instructions as to where to find information online, such as "follow us on social networking sites."

French bloggers have been up in arms on Twitter and some have even composed tongue-in-cheek ways to get round the ban. One suggested: "find live coverage of the trial on our thread on the platform which spreads messages of 140 characters"

French commentators have been speculating on the real roots of this regulation. Matthew Fraser, a social networking expert and author of "Throwing Sheep in the Boardroom," a book looking at the online social media revolution, believes the ban could be a sign of defiance against Anglo-Saxon cultural domination.

"In my mind," he said, "if it had been a French social networking site then nobody would have wanted it to be regulated, but because these sites symbolize the United States, regulation is there."

This is not the first time anglicized, Internet-related vocabulary has been banned in France. In 2003 the use of the word "e-mail" was forbidden in all government literature. This was due to the Toubon law, which tries to protect the purity of the French language from anglicized words and phrases.

This time, however, the Superior Audiovisual Council insists that the ban is in no way linked to language purity.

"It's not at all related. It's true that we are very attached to the French language and defend it a lot, but ... this is simply about reapplying existing regulations," Kelly said.

The council's decision did not cause much of a debate in the French media. Fraser believes that unlike cheese or wine there were no French interests involved and the French are simply used to regulation. "It doesn't faze them because it's part of their culture," he said.

Kelly emphasized the cultural differences that need to be taken in to account: "We have many, many rules which do not exist elsewhere. There is a very different context for this from one country to another. In the U.S., for example there are advertisements on TV every five minutes, whereas in France its more like every 20 minutes." She added that, similarly, in the United States product placement is commonplace, but it is forbidden in France.

Many are struck by the bizarre timing of the ban as it comes on the heels of the e-G8, an internet summit in Paris at which President Nicolas Sarkozy met with Facebook founder Mark Zuckerberg.